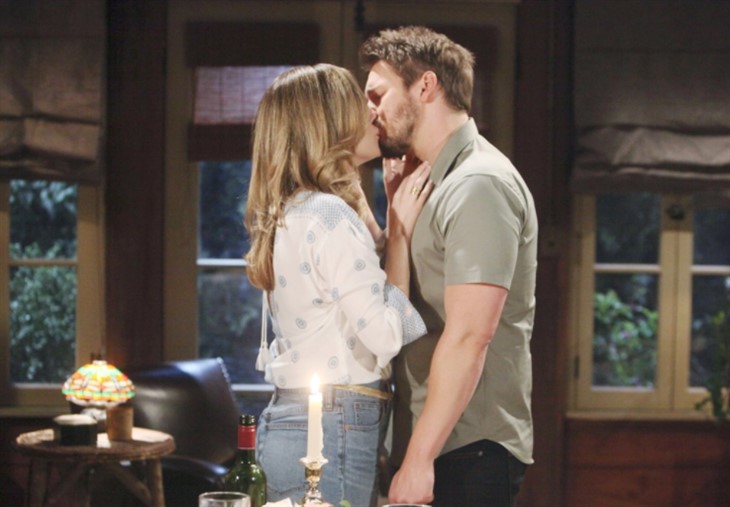 The Bold and the Beautiful (B&B) spoilers reveal that “Lope” makes love. However, the next day isn’t bliss. Hope Logan Spencer (Annika Noelle) makes a threat and tells Liam Spencer (Scott Clifton) she knows he’s keeping another secret. He can either be honest with her or their reconciliation won’t last very long. What will Liam decide to do?

The Bold And The Beautiful Spoilers – Romantic Evening For Two

B&B spoilers reveal that Liam promised to spend each day from now on proving his love to Hope. He is trying to keep that promise. Now, Liam and Hope have not been intimate since Hope found out about the one-night stand with Steffy Forrester (Jacqueline MacInnes Wood). That will change and for a short time, it will seem like everything is golden between the two.

Liam will succeed in making Hope feel loved and appreciated. Even though she doesn’t completely trust him yet, she is trying to get there. Liam’s romantic evening will be a good start and Hope ends up becoming intimate with her husband. The night seems like it goes perfectly for the couple. However, the morning after is a completely different story.

The Bold and the Beautiful spoilers reveal that Hope is on cloud nine the next day. Noelle explained to Soap Opera Digest that anyone would be after “a night like THAT.” However, Liam isn’t acting like he’s too happy. In fact, he starts acting aloof, strange, and distant. This makes Hope alarmed because it’s the first confirmation that there really is something else going on with Liam. She realizes that Liam’s problem isn’t guilted oversleeping with Steffy. That it is something much better and it means he’s keeping secrets again.

The Bold And The Beautiful Spoilers: Quinn Can’t Replace Zoe, Carter Still In Love With Exhttps://t.co/JkyKnuVqns

Hope ends up confronting Liam and telling him exactly what he will lose if he’s keeping another secret from her.

“… Liam isn’t where Hope would think he’d be after a night like that. For him to be anything less than ecstatic the next day is worrisome, and that sounds the alarm that there is something more going on… Hope says that the last thing she needs is him withholding the truth again, or not being completely open and honest with her. Initially, she brushed it off but it has now been long enough. Something bigger is going on here and it’s up to Liam whether he decides to open up and be vulnerable and take their reconciliation to the next level…”

Will Liam confess the truth to Hope? Or will he continue doing what Bill Spencer (Don Diamont) and staying quiet, even if that means it literally drives Liam crazy?