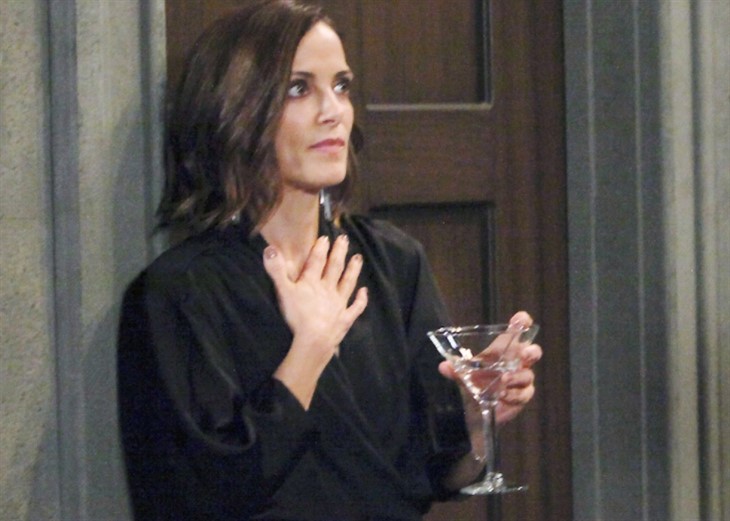 General Hospital spoilers indicate that May sweeps will continue to give viewers some thrills and some surprises. So far viewers have seen Jason Morgan (Steve Burton) go on the run. Carly Corinthos (Laura Wright) has taken over as mob boss. And Shawn Butler (Sean Blakemore) is about to open up about the day Hayden was shot. What new surprises are coming our way?

General Hospital’s Cyrus Renault (Jeff Kober) recently told Peter August (Wes Ramsey) that he has about a week to live. Cyrus is convinced that Jason is going to take Peter out now that he’s on the run. After all, Jason has never committed a crime that has been traced back to him if he didn’t want it to be. Jason wants to take Peter out but he is on his way to Canada and is helping Britt Westbourne (Kelly Thiebaud) at the present time.

However, General Hospital spoilers show Jason is not the only person who wants Peter gone. Anna Devane is determined to make Peter pay for what he has done to Harrison Chase (Josh Swickard) as well. Valentin Cassadine (James Patrick Stuart) also wants to make Peter pay. Will the writers actually kill him off? Will Peter miraculously be absolved of his guilt?

General Hospital’s Jason and Britt are still very much on the run. Britt had to convince Jason to take her along since Dante Falconeri (Dominic Zamprogna) is hot on their trail. Sam McCall (Kelly Monaco) has managed to delay Dante and even tried to run away with Jason. Jason convinced Sam to return to the children and Britt convinced Jason she still needs his protection. Britt has also opened up quite a bit to Jason about her fear of Huntington’s disease. Will Jason and Britt continue to bond while on the road?

General Hospital Spoilers – Will The Deed To Pentonville Change The Dynamics?

General Hospital’s Nikolas Cassadine (Marcus Coloma) has just bought Pentonville to try to shut down Cyrus. However, this could become a very sticky situation now that Shawn is trying to get his freedom. Shawn knows that he didn’t shoot Hayden Barnes (Rebecca Budig) because she told him so. Sam backed up Hayden’s story as well. Will Shawn be released? Will General Hospital bring Hayden back to clear Shawn’s name?

General Hospital’s Gladys Corbin (Bonnie Burroughs) has become a pain in everyone’s side. The money-hungry conniver has lied about Jason. Now Gladys is sticking her nose in everyone else’s business included Sasha Gilmore. Unfortunately, Brando Corbin (Johnny Wactor) is in for the shock of his life when Sasha admits that she’s pregnant.

General Hospital’s Sonny “Mike” Corinthos (Maurice Benard should be watching his back when it comes to Elijah Crowe (Dan White). Sonny recently made a rookie mistake and tripped the alarm. Is it any wonder why Jason is the right-hand man? Now Nina has copied files, will her missing earring be a viable excuse for her return to Elijah’s off? Will Sonny have to save Nina from Elijah?

General Hospital (GH) Spoilers: Will Willow Help Sasha Get Through Her Pregnancy? https://t.co/O4PRXLT4Hi

GH Spoilers – Will Carly Corinthos Give Contol Back To Sonny Corinthos

Now that General Hospital’s Carly has gotten a taste of running the mob, will she give control back to Sonny when he returns home? Will the power go to Carly’s head causing a rift when Sonny does return. Will Carly be ready to have the business back to Sonny or Jason, whoever returns first?  Stop by again soon to catch up on all the goings-on in Port Charles.