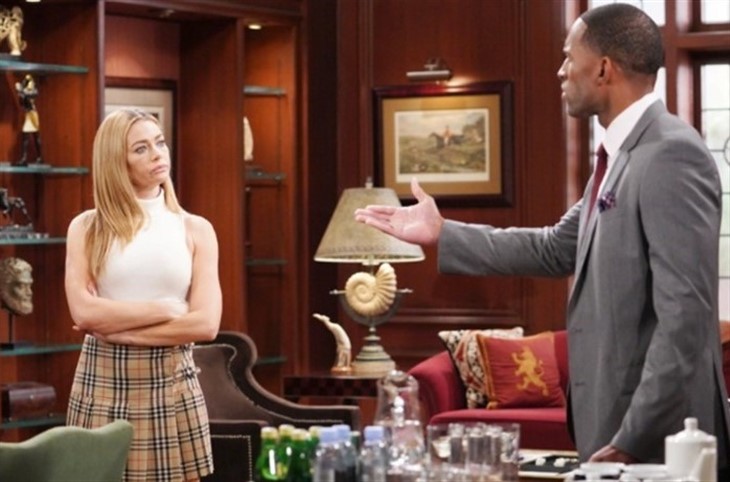 The Bold and the Beautiful (B&B) spoilers for Friday, May 14, 2021, reveal Quinn needing a quick plan to keep her affair a secret forever.

Quinn (Rena Sofer) had to tell someone she slept with Carter (Lawrence Saint-Victor) or she was going to go insane. So, if you’re going to have an affair, always go to your best friend because they will have your back. Shauna (Denise Richards) was shocked, to say the least, but then seemed to think this was a great thing.

On Friday, she tells Quinn to use the entire situation to her advantage. Zoe (Kiara Barnes) thinks Shauna is the woman who was in Carter’s bed so why not keep it that way? This way Zoe won’t figure out she really saw Quinn. If she thinks it was Shauna, this also gives Quinn cover. Zoe does have a big mouth and will probably tell everyone, which gives Quinn some cover if she wants to continue her affair. According to Shauna, Quinn can have her cake and eat it too.

Despite constantly saying that their affair is a mistake because they are in love with other people (really, Carter, you’re in love with Zoe), Quinn and Carter can’t keep their hands off each other. When they come up for air, they make a pact to never do the deed again and to never talk about it to anyone again.

Well, Quinn already told Shauna and she seems to think this is an amazing adventure and even has a cover story for them. Carter will likely figure out that Quinn told Shauna based on her reaction to Zoe’s accusations. Will he be angry Quinn told someone? He can’t exactly confide in a best friend since the only bestie he seems to have is Ridge (Thorsten Kaye). And Carter definitely knows life as he knows it will be over if he tells any of this to Ridge.

It looks like Quinn and Carter are in quite the dicey situation and if Zoe (Kiara Barnes) learns the real truth and gets wind of Quinn’s betrayal, they better watch out. Stay tuned to The Bold and the Beautiful weekdays to see how this story plays out.