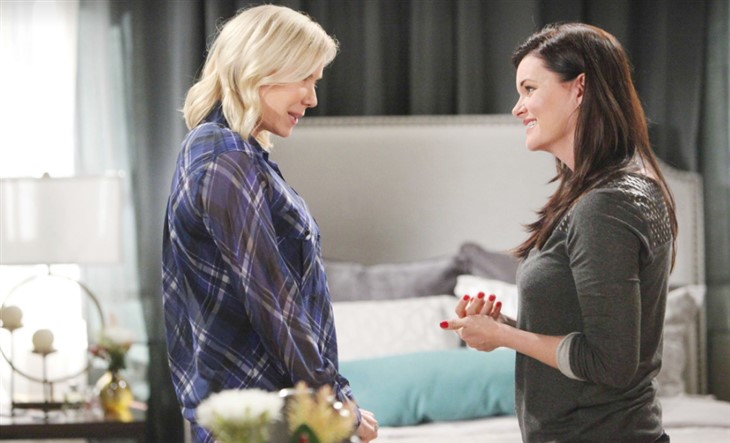 The Bold And The Beautiful Spoilers – The Sisters Are Glad He’s Out Of Jail; But Why Did He Cover Things Up?

Viewers of The Bold and The Beautiful will recall that Dollar Bill took extraordinary measures to cover everything up that fateful night when his car collided with Vinny Walker (Joe LoCicero), Liam Spencer (Scott Clifton) driving. Dollar Bill took Vinny’s phone and smashed it, and threw it and his wallet with his identification and threw it over a bridge – amazingly neglecting to wipe his fingerprints off them! He sold the car to someone in the Middle East and made sure the tires were taken off and burned, and any evidence of the collision removed.

Then he refused to call 911 and as Liam fainted, just put him in the car and drove back to his apartment, refusing to even let Liam leave until he was able to keep the events of the night a secret, although not very well. Liam was spiraling towards a nervous breakdown because of the guilt he felt, and as viewers of The Bold and The Beautiful will recall, couldn’t hold it in anymore and confessed. Because of Dollar Bill’s covering things up and refusing to call and at least report the accident even if Vinny did die at the scene, it only made it look more like an intentional murder!

It wound up that of all people, it was Thomas Forrester (Matthew Atkinson) who cleared Bill and Liam, after having been kept in a cage at Spencer Publications by a crazed-with-anger Justin Barber (Aaron D. Spears)! Even Brooke had to acknowledge Thomas was a hero when he got his phone back at the police station and played the horrible death scene video for the police that showed Vinny had committed suicide by car!

Viewers of The Bold and The Beautiful will remember that Bill and Katie have had a lot of ups and downs during their marriage, sometimes seeming like more downs than anything else! They have been working on their relationship, and Dollar Bill has volunteered to take their son Will Spencer (Finnegan George) back and forth to school. Katie has agreed to take baby steps, and even though the latest breakup was over that horrid video shown at Brooke and Ridge Forrester’s (Thorsten Kaye) celebration of their reuniting, slowly she has learned to trust – both her husband AND her sister.

Viewers of The Bold and The Beautiful will recall that Quinn Forrester (Rena Sofer) put a cell phone video Shauna Fulton (Denise Richards) took of Bill and Brooke making out in Hope Logan Spencer’s (Annika Noelle) cabin on a digital photo frame Eric Forrester (John McCook) had gifted Ridge and Brooke with. Even if blood is thicker than water, there is no worse sibling rivalry than when it is over a man! It was a moment of weakness on both Brooke and Bill’s part, one that they both have deeply regretted. Even though Brooke and Katie both agree that Bill is trying very hard to make up for the past, neither one can fathom why Bill would think he had to cover up an accident! It would not even have been a crime if he had not done that – the police would have investigated, Vinny’s phone scoured, and the video he sent Thomas seen right away. They have to wonder what may have happened in Bill’s past to cause that kind of an extreme reaction!