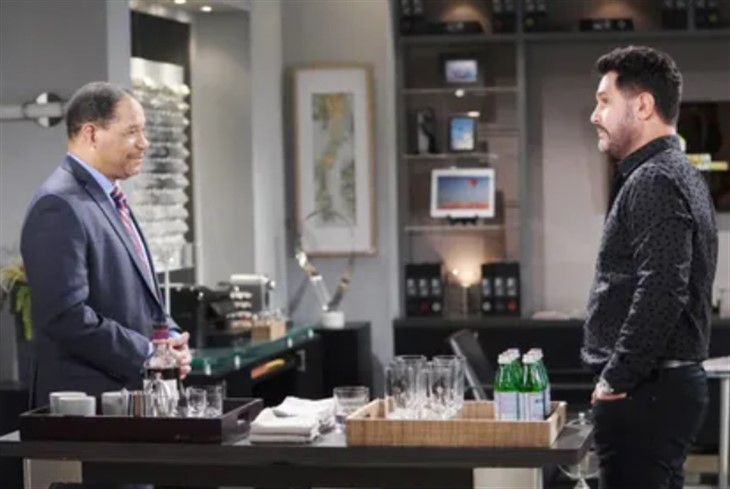 The Bold and the Beautiful spoilers for the week of May Sweeps reveal that Ridge Forrester (Thorsten Kaye) goes into battle mode. Deputy Chief Bradley Baker (Dan Martin) believes that Thomas Forrester (Matthew Atkinson) is guilty of murder. Ridge knows that his son didn’t kill Vinny Walker (Joe LoCicero). Will Thomas end up going to prison for a crime he didn’t commit?

B&B spoilers two weeks ahead reveal that Liam is overwhelmed with guilt. He thinks that he is responsible for Vinny’s death, which he very well could be. However, there is always the chance that Liam just appears to be the killer. Remember what head writer Bradley Bell and actor Don Diamont (Bill Spencer) said a few weeks ago. They both stated in separate interviews that the death might not be as it appears. So, that’s a big clue that there’s more to this story.

As for Liam’s guilt, he just isn’t cut out for covering up murder scenes. He’s also not very good at lying or keeping secrets. Bill was right when he told his son that he doesn’t have to say anything. All someone has to do is take one look at him and know he’s guilty.

B&B Spoilers May Sweeps 2021 – Being Defensive Is No Defense

The deputy chief stopped by Forrester Creations and spoke with Thomas about the hit-and-run. Liam just barely avoided being seen by Baker. However, at some point, Baker and Detective Alex Sanchez (Jeremy Ray Valdez) need to question Liam. He had just as much of a motive as Thomas, if not more.

When Baker talked to Thomas on The Bold and the Beautiful, the reformed villain instantly became defensive. That was probably a mistake. First of all, Baker is just doing his job and has to ask those kinds of questions. He’s trying to get all the facts and saying Thomas was pretty angry with Vinny wasn’t a murder accusation. It was just the deputy chief trying to get answers. All that Thomas had to say was yes or no. Unfortunately, due to Thomas overreacting, he might have made himself look somewhat guilty. Many people would react the exact same way. With that being said, police officers do tend to look more at those who reply with elevated and intense tones of voice.

The Bold and the Beautiful spoilers reveal that this week, Baker and Sanchez are going to pour over the facts. They will try to piece together the puzzle with the evidence, questioning, and alibis. After that, they will have their prime suspect and a theory on the motive. Now, the prime suspect doesn’t mean anyone is getting arrested. It just means that person goes to the top of the list.

During May Sweeps on The Bold and the Beautiful, Baker will have a chat with Ridge about the top suspect. It turns out that Baker believes Thomas is the most likely killer.

The Bold And The Beautiful Spoilers: Eric Turns To Donna, Is A Reunion On The Way For The Exes #BB #BoldandBeautifulhttps://t.co/9nXfiDckLY

It is confirmed in the new issue of Soap Opera Digest that Ridge defends his son to Baker. After Thomas finally turned himself around, it would be a shame for him to pay for a crime he didn’t commit. This is exactly what Ridge tries to tell Baker. That even though the two friends were not speaking at the time, Thomas wouldn’t kill his best friend.

Chances are that Ridge will warn Thomas that he is the prime suspect. He has already made a promise to bring Vinny’s killer to justice. However, once Thomas learns he is at the top of the suspect list, this will make him more determined to prove the truth. In fact, he will make two vows during May Sweeps. One is to protect Hope Logan Spencer (Annika Noelle) and the other is to find out who killed Vinny. So, it sounds like Thomas isn’t rolling the dice with the LAPD. However, will he be able to find out the truth and how will he react to Liam being the driver?