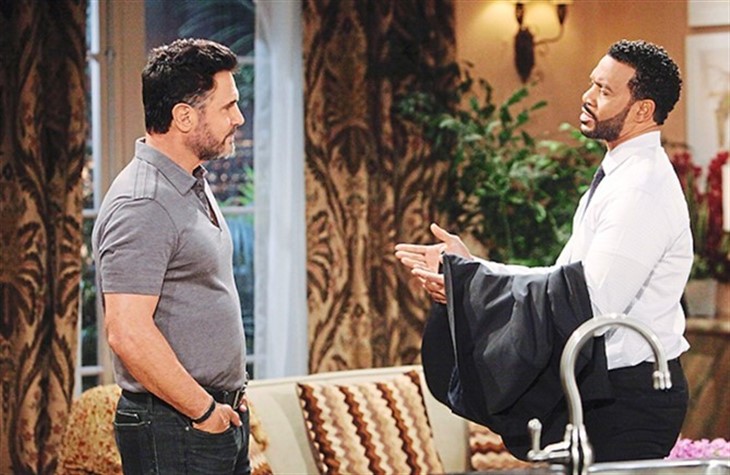 The Bold and the Beautiful spoilers reveal that Justin Barber (Aaron D. Spears) takes over Spencer Publications. When Bill Spencer (Don Diamont) finds out, he goes into a rage. He not only explodes at Justin but at Wyatt Spencer (Darin Brooks) for allowing it. What is going on between Justin and Bill? Did they have a falling out and does this explain framing Bill?

B&B spoilers reveal that Bill has always relied on his second-hand man, who is also a lawyer. Justin has always gotten Bill out of sticky legal situations. We found out that he was clueless about the murder cover-up when Justin spoke to Liam Spencer (Scott Clifton).

In fact, Bill never even called his lawyer when he was arrested. It was Hope Logan Spencer (Annika Noelle) that called Justin. Now, he claimed to be meeting with Bill after he talked to Liam. However, we haven’t seen that. That’s just what he claimed and it could be a total lie.

It is confirmed that during the week of June 21, Justin takes over Spencer Publications. When Bill finds out about this, he loses his temper. He goes into a rage and gives Justin a piece of his mind. When this was teased last week, fans were confused. Why would he explode at Justin? After all, that is his right-hand man. Bill has always trusted Justin to get him out of jams. So, it seems likely that Bill would trust Justin to run Spencer Publications more than Liam or Wyatt. However, things have apparently changed.

The Bold And The Beautiful Spoilers – Wyatt Spencer Allows It

The Bold and the Beautiful spoilers reveal that Justin isn’t the only person Bill rages at. He also yells at Wyatt about what’s happened. Even though Bill yelling at his kids isn’t anything new, why would he be upset at Wyatt over Justin handling the company? Perhaps there is something going on behind the scenes and wonders why Wyatt would allow someone else to take over Spencer Publications. Most likely, Bill expected Wyatt to tell him what Justin is doing. However, Wyatt knows that Justin is Bill’s right-hand man, so he would have no concerns over it.

B&B Spoilers – Falling Out And Revenge

Bill never called Justin when the murder cover-up happened. He also never called him on the way to the police station when Liam confessed. There might be a reason for this. The two men might have had a falling out that happened off-screen. Perhaps Justin is the person that is responsible for Vinny’s death. There is a reason why the body landed in front of Bill’s car and everyone is right, it’s no coincidence.

General Hospital (GH) Spoilers: Will Anyone Believe Maxie When She Tries To Get Louise Back?