General Hospital (GH) Spoilers: Will Anyone Believe Maxie When She Tries To Get Louise Back? 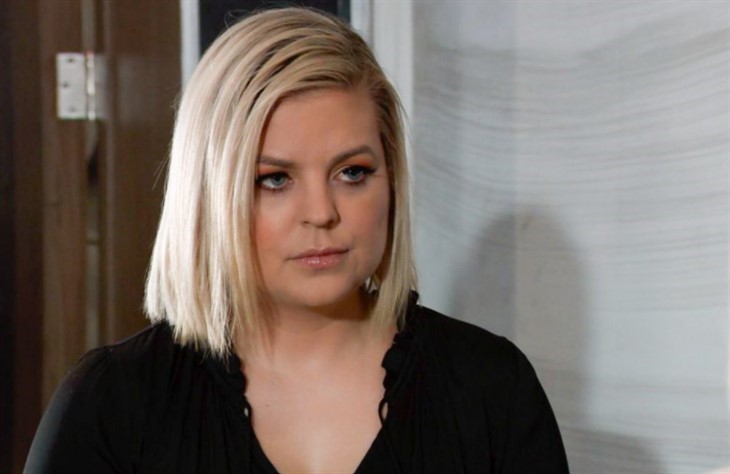 General Hospital (GH) spoilers tease that Maxie Jones (Kirsten Storms) can’t even begin to think about reclaiming her baby from Brook Lynn Quartermaine (Amanda Setton) until there is some sort of proof that Peter August (Wes Ramsey) is no longer in a position to be a threat to either Maxie or their baby. While viewers are aware that Peter is dead, his body hasn’t been found. And until that happens, Maxie can’t do the one thing she longs for which is to have her baby.

When Georgie Jones (Lily Fischer) asked her mother where her little sister was, Maxie actually told her a version of the truth. She told her that she gave her baby to a friend who was sad and needed to have the baby for now. Damian Spinelli (Bradford Anderson) had no idea that the tale that Maxie concocted was actually a version of the truth. Will Maxie have hidden her baby so well that no one will believe her! For now, Brook Lynn is still seemingly willing to give the baby back but the longer she bonds with the little girl, the more likely it seems that she won’t be so willing down the road. If she doesn’t back up Maxie’s story and decides to keep Maxie’s baby, Maxie may have a hard time convincing anyone else.

At one point, both Dr. Britt Westbourne (Kelly Thiebaud) and Bobbie Spencer (Jacklyn Zeman) had been recruited to deliver Maxie’s baby and hand her off to a third party. While it doesn’t seem like either of them knew who the third party was, the fact that Maxie and Brook Lynn had their babies at the same time should at least raise a red flag. But if Brook Lynn does come clean to Valentin Cassadine (James Patrick Stuart), he might very well do whatever he has to in order to keep Maxie’s baby with both him and Brook Lynn. Both would-be parents have already bonded with the little girl and with their combined resources, they could make it very difficult for Maxie to claim her own baby. Hopefully, they will see how much Maxie has sacrificed and will do the same, but it may take quite a while before they do the right thing.

When will Maxie be able to claim her baby? Will Brook Lynn still be willing to give her back as promised? Or will she come clean to Valentin and hope he will feel the same way after hearing the truth? Can Bobbie Spencer of Dr. Britt Westbourne be enough to convince the rest of the world that Maxie is telling the truth? Will a DNA test be enough proof or will someone once again tamper with results at General Hospital? Maxie Jones will fight to get her baby back once again so stay tuned to General Hospital airing weekdays on ABC. And don’t forget to check back right here regularly for all your General Hospital news, information, and spoilers!