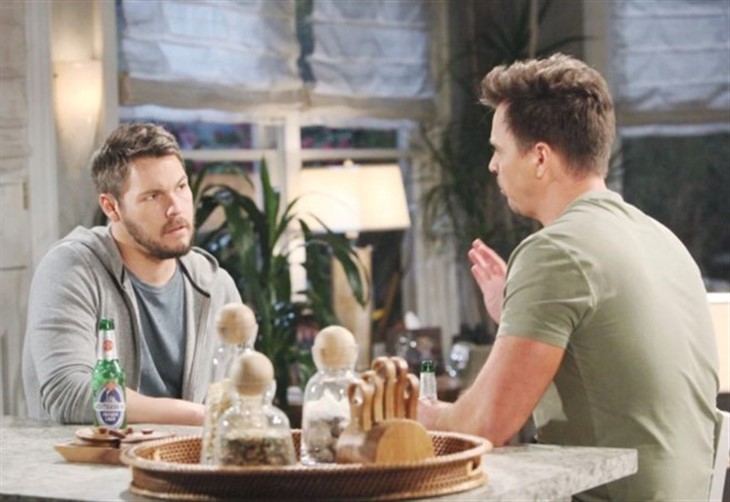 The Bold and the Beautiful (B&B) spoilers for Friday, May 17, 2021, reveal Wyatt needing to know what the heck is going on with his father and brother.

The Bold And The Beautiful Spoilers – Will Another Spencer Become An Accomplice?

After a week or two of watching Quinn (Rena Sofer) pine for Eric (John McCook) and then have a few torrid romps in the hay with Carter (Lawrence Saint-Victor), we’re back to Liam (Scott Clifton) and Bill (Don Diamont) panicking about Vinny’s (Joe LoCicero) death and keeping the way he died a secret. Not much has changed since we last left them and even Wyatt (Darin Brooks) is back on the scene.

He knew something was up between his brother and father before and now both of them are acting stranger than ever. Bill is put on the spot when Wyatt shows up at his Spencer Publications office with his suspicions. Will he crack and drag yet another kid into a mess he created by just driving away that night? This story might get more interesting if all three Spencer men were losing their minds and snapping at one another.

B&B Spoilers  – Liam Spencer Tries To Forget Who He Is

And then there is Liam who is trying to put the whole sorry mess behind him. So, he killed a man. Does it matter? No, because Hope (Annika Noelle) invited him home and now he is back with her and the kids where he thinks he belongs. Hope told him she doesn’t forgive him for everything but Liam is sure he can make that happen.

So, he starts by giving Hope a romantic night to sweep her off her feet. Hope tries hard to resist her husband but she’s so flattered and moved by everything Liam did. He’d never dare cheat on her again or keep any more secrets, right? No, not Liam. Not ever.

It looks like Hope is about to give in and let Liam back into her life completely. She’s loved him for years and just can’t see that Liam will never, ever change. This won’t end well, Hope. You should have listened to your first and 10th instincts and every instinct in between. Stay tuned to The Bold and the Beautiful weekdays to see how this story plays out.