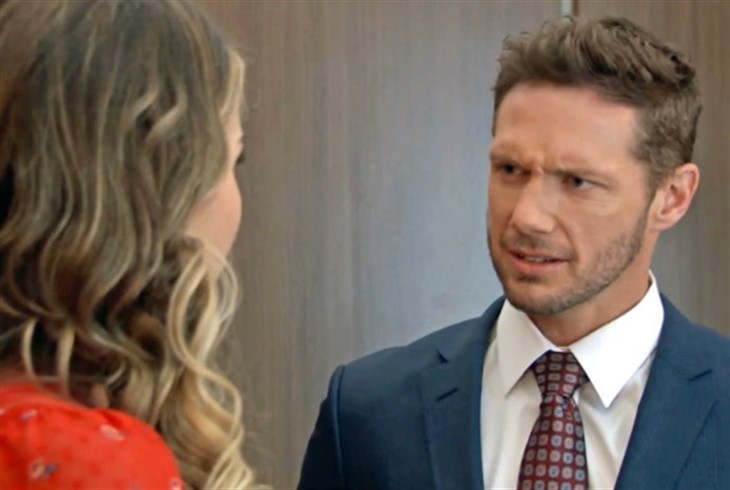 General Hospital (GH) spoilers tease that Sasha Gilmore (Sofia Mattsson) is pregnant after her one night of passion with Brando Corbin (Johnny Wactor). Sasha hasn’t told Brando yet, but given his current situation, he might be better off at least for now not knowing he is about to be a father. As viewers know, Brando has basically been working as a spy, first for Sonny Corinthos (Maurice Bernard), and now because of Sonny’s presumed death, for Sonny’s wife Carly Corinthos (Laura Wright).

Brando has been able to help give Carly the heads up when Cyrus Renault (Jeff Kober) makes plans against her or her family. But Brando can’t be of use to Carly for much longer, because Cyrus will figure out Brando’s true allegiance when his enemies know something that only he and Brando knew.

General Hospital Spoilers – Cyrus Renault Will Kill Anyone Who Betrays Him!

Recently, Dr. Britt Westbourne (Kelly Thiebaud), who Cyrus had installed as Chief of Staff at General Hospital, began investigating the troubling increase in drug overdoses in Port Charles. Realizing that Cyrus is peddling his new more addictive product to the people of Port Charles, Britt has thrown in with Jason Morgan (Steve Burton). But Cyrus saw that as a betrayal and ordered his men to kill Britt and make it look like an overdose. Britt only survived because Jason saved her.

The same thing will happen to Brando as soon as Cyrus realizes he is loyal to Carly. And if Sasha’s pregnancy by Brando becomes common knowledge, Cyrus won’t hesitate to harm mother or child. But Brando’s mother, Gladys Corbin (Bonnie Burroughs) may once again reveal information to the wrong people. She overheard Sasha requesting anti-nausea medication and if she figures out that Sasha is carrying her grandchild, she will certainly inform Brando. But even worse, she will likely tell Cyrus.

GH Spoilers – Gladys Corbin Will Realize Too Late How Dangerous Cyrus Renault Is!

Gladys won’t want any harm to come to Sasha or her future grandchild and she may finally get a clue that harm is the only thing that Cyrus knows. She might very well stand up to the drug lord, but that will simply make her another victim. Gladys’ big mouth may be what kills her, but it could also force Brando to do Cyrus’s bidding. All Cyrus would have to do is threaten Sasha or the baby and Brando would be forced to do whatever Cyrus wants. Perhaps the best course of action would be for Sasha to lie that someone else is the father. Perhaps a one-night stand, or Michael Corinthos (Chad Duell), or maybe even Harrison Chase (Josh Swickard). Brando won’t like it, but it’s better than his association with Cyrus putting a target on either Sasha or their baby!

Will Brando find out Sasha is pregnant with his baby? Or will she lie about the baby’s paternity to keep the baby safe from Cyrus? Will Gladys ruin everything and will she live to tell about it? Should Michael or Chase step up and claim paternity until Brando can get away from Cyrus? The mob is impossible to leave in Port Charles, so stay tuned to General Hospital airs weekdays on ABC. And don’t forget to check back right here regularly for all your General Hospital news, information, and spoilers!