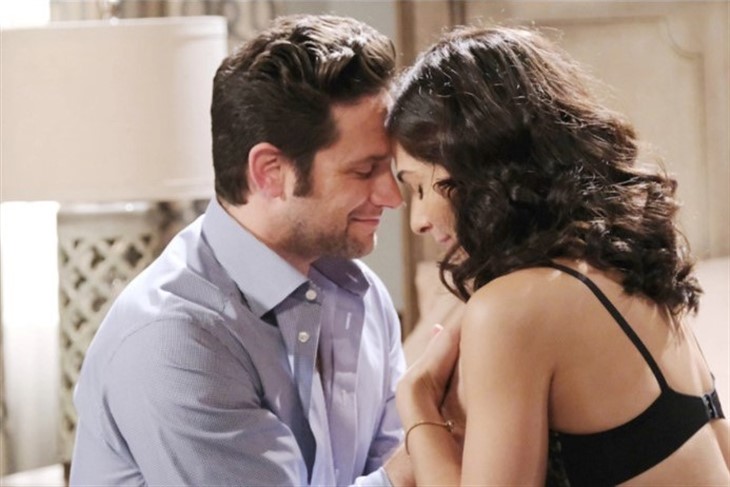 Days of Our Lives (DOOL) spoilers reveal that Jake DiMera (Brandon Barash) “commits” to Gabi Hernandez (Camila Banus). We have already seen them sleep together and Jake even said the “L” word. He admitted that it was always her, even when he was with Kate Roberts DiMera (Lauren Koslow). So, could they make things official and get married?

DOOL spoilers reveal that once Jake was dumped by fake Kate, who was really Kristen DiMera (Stacy Haiduk), he went straight to Gabi. However, she slapped him across the face and stormed off. Surprisingly enough, it was Xander Kiriakis (Paul Telfer) who talked to Jake and led to him realizing that it was Gabi he’s wanted all along.

When Jake went back to see Gabi, he managed to open his heart and tell her how he really felt. Fans know that Gabi has never let go of Jake. So, it was surprising that she pushed him away when Kate disappeared and “dumped” Jake. However, she wouldn’t be able to say no to him when he came back a second time.

Days Of Our Lives Spoilers – Gabi Hernandez Gets What She Wants

Days of Our Lives spoilers reveal that Gabi got what she wanted. The two ended up in bed multiple times. Then, Kate showed up. She explained where she had been and what happened to her. Even though it was an awkward situation for Jake, he had made up his mind. He was going to stay with Gabi and needed to tell Kate that they were over. He planned on doing that, as well as taking Kate to the hospital since she was clearly in bad shape.

In the new issue of Soap Opera Digest, it is teased that Jake will “commit” to Gabi. Since he already said the “L” word, what could be the next step? Could it end up being a marriage? It’s true that they have only been back together for less than 12 hours. However, if Jake is that convinced that Gabi is the only woman for him, then we could see the two get married soon. After all, they have been playing this game ever since Gabi came back from Mexico. The only person that is missing is Gabi’s daughter, who is now off-screen with Sonny Kiriakis (Freddie Smith and Will Horton (Chandler Massey).

What do you think of Jake “committing” to Gabi? Would you like to see these two walk down the aisle? Will Gabi ever be reunited with her daughter or will she remain off-screen with “Wilson” forever? We will have to keep watching the NBC soap to see how this story develops over the upcoming week.