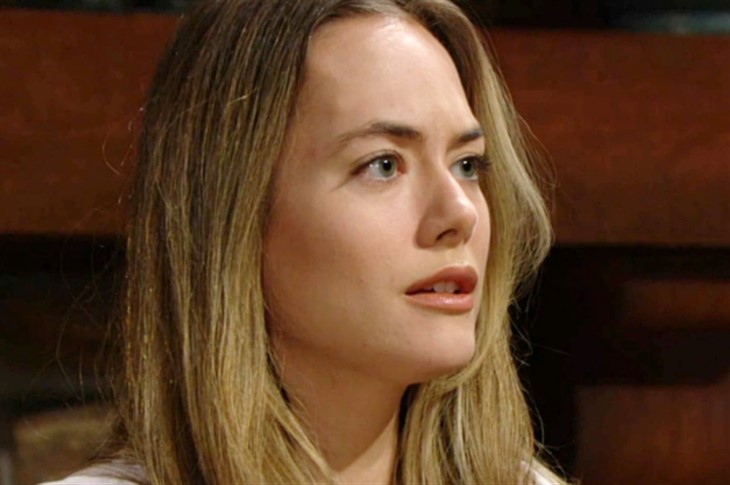 The Bold and The Beautiful (B&B) spoilers tease that Hope Logan Spencer (Annika Noelle) will rush to the hospital to help make a victim identification in an upcoming episode of The Bold And The Beautiful!

Viewers of The Bold and The Beautiful will recall that a death has occurred of a family friend. Viewers saw Dollar Bill Spencer (Don Diamont) and his son Liam Spencer (Scott Clifton) driving home in the dark from where they had met with Hope and her mother Brooke Logan Forrester (Katherine Kelly Lang) at the cabin where Hope lives. Bill and Liam were driving along and having a nice talk when all of a sudden Liam saw something in front of him in the road and hit it! It all happened so fast, he didn’t seem sure if it was an animal or a person and asked Bill to get out and look.

Ultimately they both got out and looked at the object in the road and Liam recognized Vinny Walker (Joe LoCicero) who looked like he was wearing a track suit, perhaps out jogging in the cooler evening air. Liam seemed heartbroken, but Bill seemed panicked! Bill makes a decision for the both of them that they just need to leave the scene – against Liam’s better judgment! Instead of calling 911, it looks like they left the scene of the hit and run and Vinny died alone in the road, or he died in front of them and Bill panics! He tells his son not to tell anyone what happened, and that he will “fix it”. This will prove not to be one of Bill Spencer’s better ideas!

B&B Spoilers – After Hope Logan Spencer Worries About Liam Spencer Not Making Their Lunch Date, She Gets A Call!

It’s almost certain that Liam is still arguing with Dollar Bill over his covering up the death, when he misses his lunch date that Hope set up with him. Hope naturally worries and she probably tries to call him but he’s still in the midst of shock over running over another human being and causing his death and arguing with Bill’s choice to not tell anyone what happened! One has to wonder what exactly is going through Dollar Bill’s head, considering it was plainly an accident, all they would have had to do was call it in. It didn’t become a crime until they drove away, and even then, leaving the scene of an accident, even a fatal one, is not necessarily a serious criminal action. No one knows they were there and no one knows what time it happened except them, other than Vinny, and he’s not telling!

The Bold and the Beautiful Spoilers: Vinny's Death Not An Accident? – Suspicious Circumstances Revealed #bb #boldandBeautifulhttps://t.co/jPWYDWj89v

The coroner will be able to estimate the time of death but unless highway cameras or another motorist saw what happened, no one can place Bill and Liam at the scene. Liam wasn’t the one who had outed Vinny for altering the results of the paternity test to show Liam was the father instead of Steffy Forrester’s (Jacqueline Macinnes Wood) boyfriend Dr. John “Finn” Finnegan (Tanner Novlan). Vinny would not have had any reason to accuse Liam of running him down had he lived to tell the tale! But now Hope, who already has been worried that Liam has missed their lunch date and cannot reach him, panics! She gets a call from the hospital to come and help identify a body – of course she panics. She will think it’s Liam!