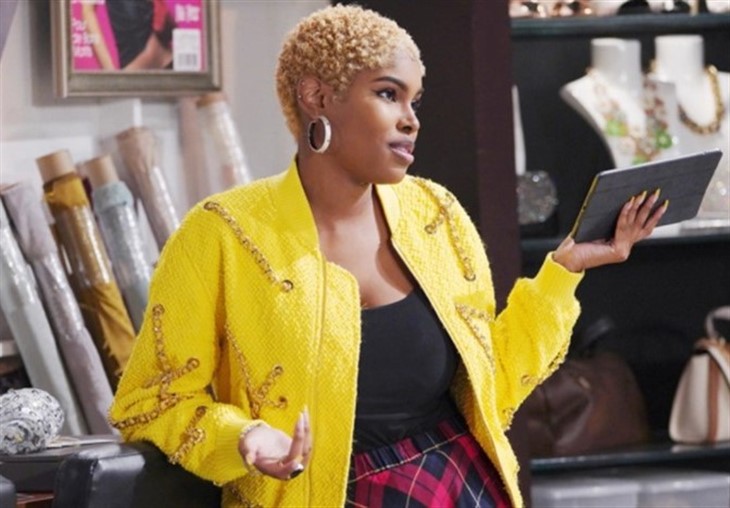 The Bold and the Beautiful (B&B) spoilers reveal that Quinn Forrester (Rena Sofer) was in the April Fool’s spirit. She helped Zoe Buckingham (Kiara Barnes) spread some mischief with Eric Forrester’s (John McCook) enzymes. Paris Buckingham (Diamond White) unknowingly consumes the enzymes, which cause her some very vocal stomach issues on her date.

The Bold And The Beautiful Spoilers – Quinn Forrester Craving Mischief

B&B spoilers reveal that Eric and Quinn are back together. However, the patriarch has made it clear that he won’t tolerate any more of her schemes. If Quinn causes any further trouble for Brooke Logan Forrester (Katherine Kelly Lang), then the marriage will be over. So, Quinn has been behaving herself. That means she is overdue for some mischief and she found the perfect opportunity by running into Zoe and Paris.

Dropping some very big hints, Quinn left the office for a minute. There was a reason she told Zoe the story about enzymes affecting Eric’s stomach. Zoe jumped at the opportunity and slipped the enzymes into the Paris’ shake. Of course, Paris has no idea that her shake has been “enhanced.” While she’s drinking it, Paris finishes up her work and then gets ready for her date.

The Bold and the Beautiful spoilers reveal that actor Delon de Metz talked about the disastrous date with Soap Opera Digest. He arranged very special French cuisine. He explained that French food can be a bit funky for some stomachs, especially if someone isn’t used to it. Paris has never tried French food before. So, when her digestive system starts getting very loud, they both assume it’s the French food. The enzymes make it even worse and Paris will end up being completely humiliated.

“Paris is totally humiliated, and Zende blames himself for making the evening more unusual than it should have been.”

The Bold And The Beautiful Spoilers: Douglas’ Family Plan – Begs Thomas To Move In, Wants Hope To Be Happyhttps://t.co/q2f4LuGKAg

Even though Zoe succeeded at humiliating Paris, it turns out that Zende Forrester doesn’t’ scare easily. Despite the extremely loud sound effects coming from Paris’ stomach, the two still have a good time.

“Despite the evening, things are copacetic between them, and hopefully, at some point, they’ll be able to laugh about this night.”

However, Zoe’s goal wasn’t to break up the couple, although that would be a dream come true for the bitter model. She wanted to humiliate her sister. Most of all, Zoe wanted to prevent Zende and Paris from taking their relationship to the next level. What did you think of the prank scene? Were you surprised that Quinn was wasting her time with someone like Zoe? Did you enjoy a lighthearted prank in honor of April Fool’s Day?