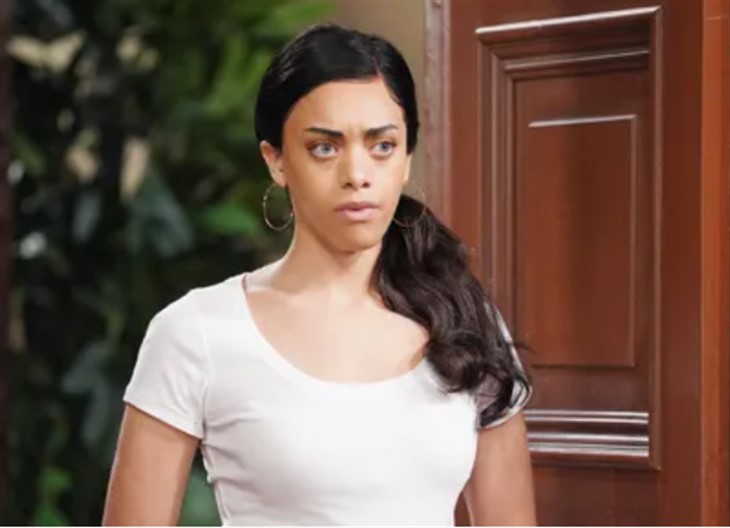 The Bold and the Beautiful (B&B) spoilers reveal that Zoe Buckingham (Kiara Barnes) learns that Carter Walton (Lawrence Saint-Victor) has moved on. Instead of forgetting about her ex, Zoe starts interrogating everyone about Carter’s new woman. It appears that even Zende Forrester (Delon de Metz) might be accused of keeping the mystery woman’s identity a secret.

The Bold And The Beautiful Spoilers – Zoe Buckingham’s Realization

B&B spoilers reveal that Zoe tries to surprise Carter but it backfires in an unexpected way. Most likely, she helps herself inside Carter’s place and goes up to his bedroom. However, Carter probably won’t be alone. He will be with Quinn Forrester (Rena Sofer). Since Zoe finds out that Carter has moved on but doesn’t know with who, we are guessing that Quinn hides underneath the sheets.

It is confirmed that Zoe will be heartbroken over finding out that Carter has a new woman in his life. However, she can’t help but be curious. She will want to find out who the woman is and will start asking questions. Carter and Quinn’s secret is only known to them, as well as Shauna Fulton (Denise Richards). So, when Zoe starts asking questions, nobody will know anything. However, Zoe will find this hard to believe and be even more determined to find out the woman’s name.

The Bold And The Beautiful Spoilers – Zende Forrester Accused

The Bold and the Beautiful spoilers reveal that a photo in Soap Opera Digest shows Zende. He appears to be completely shocked. He is also holding his arms out as if he’s claiming to be innocent. We have to wonder if Zoe will accuse Zende of keeping Carter’s new woman a secret from her. Even though Zende and Zoe aren’t close anymore, the model seems to think that he should still tell her anything. He is telling the truth, though. Zende knows nothing about Carter’s new bedroom partner.

The Bold And The Beautiful (B&B) Spoilers: Hope Reminds Liam How Much He’ll Lose, Steps Up Facade https://t.co/iE84ufN6Fm pic.twitter.com/ZZaXNzGMYv

It is confirmed that Zoe will confront Carter and demand to know who replaced her. However, what is Carter supposed to say? Give her a list of names of everyone he moves on with after breaking up with her? It is likely this is where Shauna comes in to save the day. However, that might cause more damage than good. It is teased that the affair will become extremely messy and complicated.

Then, we see a photo of Zoe making a passionate plea to Shauna. Could Shauna end up being Zoe’s next target and if so, how will Quinn protect her BFF? We will have to keep watching the CBS soap to find out what happens next with this storyline.