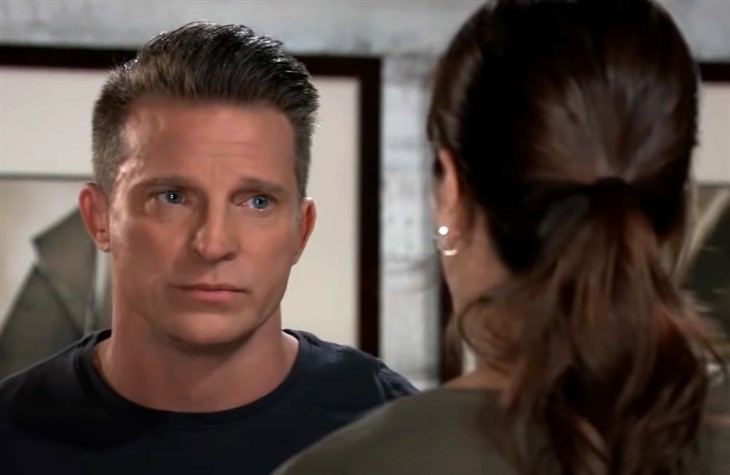 General Hospital (GH) spoilers say that Jason Morgan (Steve Burton) and Britt Westbourne (Kelly Thiebaud) have been playing with fire – and quite literally, too. With both of their lives on the line, they only had each other to count on, with Britt saving Jason’s life, and Jason doing the same for her. With the two of them sharing so much screen time together, a lot of fans can’t help but wonder: should Britt and Jason hook up? We’ve got three reasons why it should happen below. Check it out and let us know what you think.

General Hospital Spoilers – They Need Each Other Right Now

Britt wants to keep Jason safe and if there’s anything that we’ve learned about Jason over the years, it’s that he’s the ultimate protector. He won’t let Britt get into harm’s way even though the two of them are on the run together. All that pent-up energy would surely translate into some major chemistry, right?

Let’s face it, even though Sam McCall (Kelly Monaco) is currently spending a lot of time with Dante Falconeri (Dom Zamprogna) right now, she will always be Jason’s girl, no matter what. It’s just too unfortunate that these two can’t realize it. But seeing Jason with another woman (and in a hot romance, to boot) might make Sam see what she’s missing out on.

After Britt helped save Jason’s life, both of them will realize that they have a strong connection between them. Jason took a bullet for the woman, and that’s something Britt will never forget. They will also soon find that they have a lot in common and that they both have hearts of gold. They will do anything for the people they love. But of course, there’s also the possibility that Britt might have a fatal disease, which means these two don’t have much time on their hands. Watch this space as we have a feeling that this won’t be the last that we’ll see of Britt and Jason together. In fact, it just might be the beginning of something very new and special for them.