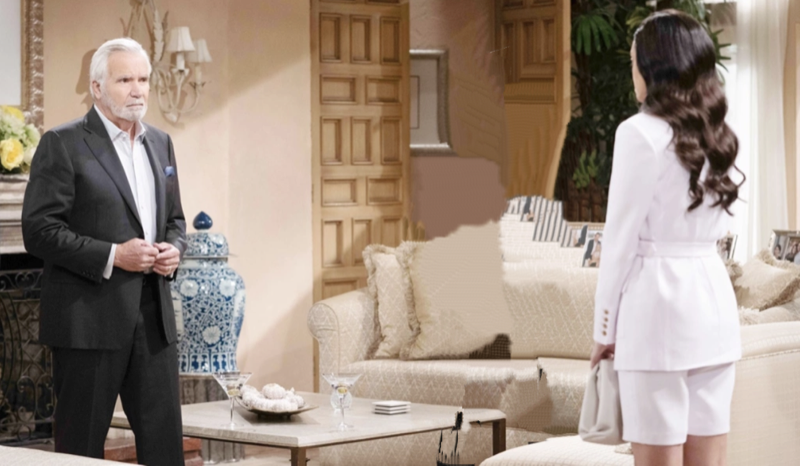 The Bold and the Beautiful (B&B) spoilers and updates reveal Zoe Buckingham (Kiara Barnes) has been having trouble with her relationship. She had been in a relationship with Carter Walton (Lawrence Saint-Victor). They had been engaged to be married. However, she made a mistake by flirting with Zende Forrester Dominguez (Delon de Metz). Carter was upset that Zoe would be interested in another man. He broke off his engagement to Zoe. Zoe needed help to try to convince Carter to give her a second chance.

She turned to Quinn Forrester (Rena Sofer) to help her. She wanted Quinn to convince Carter to give her a second chance. Quinn tried to help Zoe but started to confide her problems with her marriage to Eric Forrester (John McCook) to Carter. Quinn and Carter have ended finding comfort with each other which has led them to have an affair.

Zoe and Eric will be devastated to find out that Carter and Quinn are having an affair. Zoe may want to get back at Quinn for being with the man that she loves. She may think that it would be acceptable to try to get Eric to go out with her. However, Eric will see that Zoe is not in a good place. He will want to help her in some fashion. Eric will need support when he finds out that Quinn has had an affair with Carter. Eric still loves Quinn even though he has been upset with her over the fact that she tried to sabotage his son Ridge Forrester (Thorsten Kaye) and Brooke Logan Forrester’s (Katherine Kelly Lang) marriage. Quinn thought that her friend Shauna Fulton (Denise Richards) would be a better match for Ridge than Brooke. Eric will be upset that Carter has had an affair with Quinn. Eric and Carter are close and it will be difficult for Eric to find out that Carter has betrayed him.

Eric may believe that Zoe needs to have a way to get back at Carter. He may think that he and Zoe should have a pretend relationship. Eric may believe that Quinn and Carter deserved to feel bad after they betrayed them. Eric will want to make sure that Zoe has the support that she needs. He may have Zoe move into his home to make the relationship appear to be real. It would come as a surprise to many that Eric and Zoe had become a couple because Eric is much older than Zoe.

Bold and the Beautiful Eric and Zoe are going to have trouble dealing with Quinn and Carter’s affair. Eric will not want to be with Quinn. He may take down the portrait that he has of her over the mantle. Will Eric be able to forgive Quinn with time? Eric will be angry with Carter. Will Carter lose not just Eric’s respect but everything else? Zoe may end up wanting to do something destructive. Could she want to hurt herself or Eric over the situation with Carter and Quinn? Will she want to harm Carter and Quinn? Could Eric find a way to help Zoe with her grief?

Tune in to Bold and the Beautiful to find out how Eric will help Zoe in regards to Quinn and Carter’s affair.