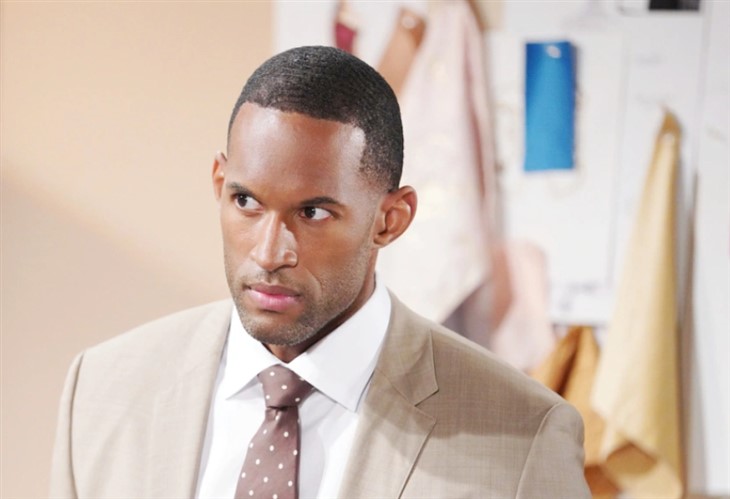 Bold and the Beautiful (B&B) spoilers show Carter Walton (Lawrence Saint-Victor) has a potential problem. He is the trusted Chief Operating Officer of Forrester Creations. He is also a respected lawyer. He had been in a relationship with Zoe Buckingham (Kiara Barnes). He wanted them to get married.

However, Zoe flirted with Zende Forrester Dominguez (Delon de Metz) on The Bold and the Beautiful. Carter was upset that Zoe was interested in another man. He ended the relationship with Zoe. Carter has been reluctant to be in a serious relationship since the one he had with Maya Avant (Karla Mosley) came to an end. Zoe wanted Quinn Forrester (Rena Sofer) to help her to get Carter back. Quinn was trying to convince Carter to give Zoe a second chance.

The Bold And The Beautiful Spoilers – Carter Walton And Quinn Fuller

Quinn had been trying to get Carter to take Zoe back. Quinn wanted to be a friend to Zoe. Quinn has made many mistakes in her past. Quinn had been confiding in Carter that she was having trouble with her marriage to Eric Forrester (John McCook). Eric was upset that Quinn had tried to break up Ridge Forrester (Thorsten Kaye) and Brooke Logan Forrester’s (Katherine Kelly Lang) marriage. Quinn believed that her friend Shauna Fulton (Denise Richards) would be a good match for Ridge.

Eric has wanted to be intimate with Quinn because she tried to sabotage his son’s marriage. Carter is close to Eric and respects him. He wants Eric and Quinn to be happy in their marriage again. Carter and Quinn were just finding comfort with each other as friends.

However, Carter and Quinn ended up having a one-night stand on the B&B soap opera. Quinn is unsure of what she has done because she does want to work out her relationship with Eric. Carter and Quinn have decided they cannot see each other.

Carter was unable to forgive Zoe for her flirtation with Zende. However, Carter has had a one-night stand with Quinn. He may be able to forgive Zoe. He knows that Zoe has had some trouble with men. She had two failed relationships with Thomas Forrester (Matthew Atkinson) and Xander Avant (Adain Bradley).

B&B recaps and spoilers reveal Zoe has had a troubled past because she helped her father Dr. Reese Buckingham (Wayne Brady) deceive Hope Spencer (Annika Noelle) and Steffy Forrester (Jacqueline MacInnes Wood). Zoe regretted her part in her father’s plot. Carter has seen how Zoe has tried to make amends for her past actions.

The Bold And The Beautiful Spoilers And Recap Tuesday, May 4: Liam Loses His Grip On Reality – Zoe Fears The Worst #BB #boldandBeautifulhttps://t.co/VDXk3sxn8D

Bold and the Beautiful spoilers tease Carter has to decide who he wants to be with. Carter can make the safe choice to be with Zoe. He truly did care about her and was going to marry her. Will Carter find a way to forgive Zoe because he had a one-night stand with Quinn? Can he keep the secret from Zoe that he was with Quinn? Carter may not be able to forget being with Quinn.

Keep checking Soap Opera Spy for more The Bold and the Beautiful spoilers, news, and updates.