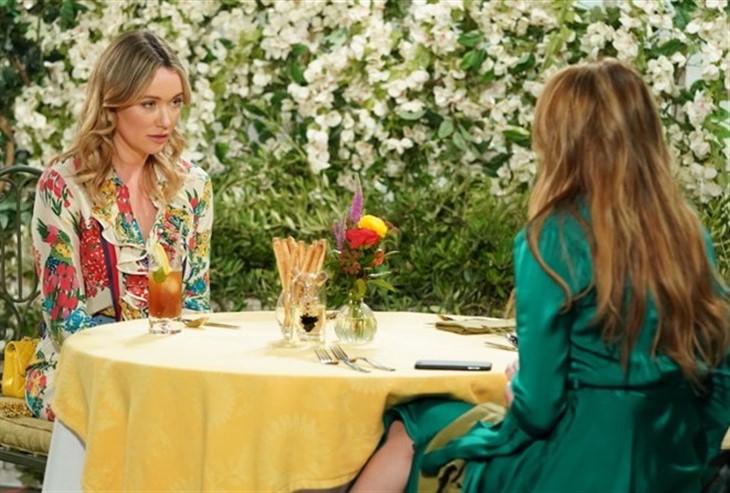 The Bold and the Beautiful (B&B) spoilers reveal that in Los Angeles Flo Fulton (Katrina Bowden) tells Summer Newman (Hunter King) the information she wants to know. However, she is quite sneaky about the whole thing. She deceives Wyatt Spencer (Darin Brooks) and meets Summer secretly. Bowden says Flo feels it’s her “duty” to help Summer.

The Bold And The Beautiful Spoilers – Wyatt Spencer’s Stance

B&B spoilers reveal that Summer tries to get information out of Wyatt about his former flame. However, she is unsuccessful. Wyatt isn’t happy that he helped Summer get a meeting with Bill Spencer (Don Diamont) so JCV and Spencer Publications could collaborate, only to have her visit really be about Sally Spectra (Courtney Hope). After overhearing Wyatt give Summer vague and non-answers to her questions, Flo decides to take action.

Flo and Sally have a long history and there’s a lot of bad blood between them. It all surrounded one man… Wyatt. Even though Sally did go overboard and really acted out of character with the sickness scheme, Wyatt has forgiven her. He truly just wants her to have a good like moving forward. But Flo doesn’t feel the same way. She wants vengeance and she finds it by eavesdropping on Wyatt and Summer’s conversation.

Flo approaches Summer and gives her a tiny taste of what information she can provide. Summer is intrigued, so the two women arrange a secret meeting so Flo doesn’t get caught by Wyatt.

The Bold And The Beautiful Spoilers – Flo Fulton’s Duty

The Bold and the Beautiful spoilers from the new issue of Soap Opera Digest reveal Flo’s goal. Bowden explained that for such a long time, Flo was forced to “tolerate” a “crazy woman” named Sally Spectra. She loves Wyatt and admires he’s such a good man who believes in second chances. At the same time, Flo believes that Summer needs her help if she’s dealing with someone like Sally.

“After they’ve chatted for a while for awhile and they feel comfortable together, Flo is like, ‘Okay, if I can help this girl with this crazy woman that I put up with, that is my duty.’ I can’t tell you exactly what they talk about, obviously, but you can imagine, it’s pretty playful. Flo definitely wastes no time getting down to business.”

Bowden added that a part of Flo will always worry about Sally even though she’s several states away. As for why deceive Wyatt and go behind his back to trash Sally, the actress said that Flo is “protecting her territory.” While Summer thinks Sally doesn’t know she’s in L.A., that secret was burst open on a recent episode of The Young and the Restless. Sally’s keeping her cards close to her chest, but she’s plotting on how she can deal with Summer… and Flo.