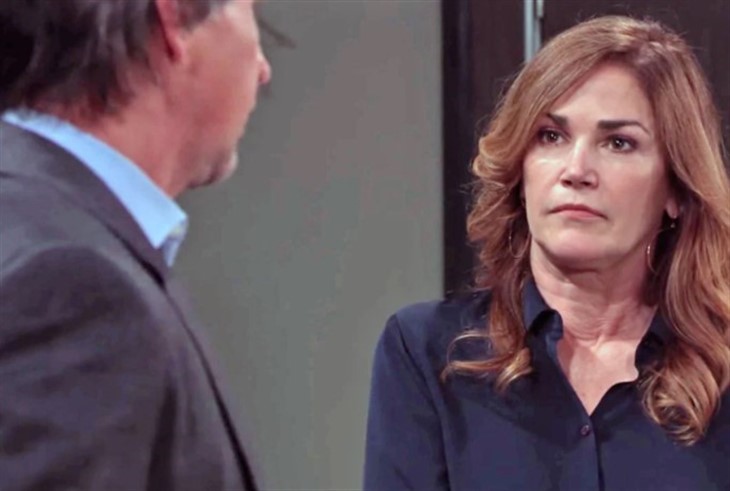 General Hospital (GH) spoilers tease that in Port Charles, NY even though Jackie Templeton (Kim Delaney) us attending the wedding of Dr. Hamilton Finn (Michael Easton) and Anna Devane (Finola Hughes) with long-time friend and ex-lover Robert Scorpio (Tristan Rogers), it’s her past with Finn that might blow the wedding sky high. Jackie and Finn have a secret past, and the wedding might be when everything comes out in the open!

Long before she had even met Finn, Jackie was a major player in Port Charles! She shared many adventures with Luke Spencer (Anthony Geary) and Robert. She and Robert had just started getting serious when Luke went missing and was presumed dead. Luke had been in a relationship with con-artist Holly Sutton (Emma Samms) at the time, and soon Holly discovered she was pregnant with Luke’s child and about to be deported! Robert married Holly and the two fell in love, leaving Jackie alone. Angry, Jackie eventually left town.

GH Spoilers – Jackie Templeton Has A history With Hamilton Finn!

At some point after leaving Port Charles, Jackie met Hamilton Finn. She had feelings for Finn, but since he was the subject of her story they kept their distance. Finn introduced Jackie to his father, Gregory Chase (Gregory Harrison) and shockingly, Jackie and Gregory got engaged. But Finn and Jackie gave into their passion the night she was to marry his father. When Finn didn’t do anything to stop the wedding, Jackie went through with the ceremony. Jackie and Gregory have been together until recently, and are now separated.

Jackie became pregnant not long after the wedding, and Finn discovered this asked Jackie if he was the baby’s father. Jackie said it wasn’t possible, that the timing was off. Finn didn’t want to make waves, so he disappeared from his family’s lives until a few years ago, when Chase came to Port Charles. And now the entire family is currently in Port Charles.

It seems quite likely that Jackie is tired of keeping secrets. Watching Finn marrying Anna might bring back all those memories her own wedding to Gregory. Finn didn’t stop Jackie’s wedding all those years ago, and perhaps Jackie had wished he would. Her feeling for Finn might very well still be there, and she might be ready to let those feelings be public, even though it could blow her entire family’s life apart!

Will Jackie interrupt Finn and Anna’s wedding? Is Finn really Chase’s father, not his brother! Is Jackie still in love with Finn? Love is complicated in Port Charles, so stay tuned to General Hospital airing weekdays on ABC! And don’t forget to check back right here for all your General Hospital news, information and spoilers!