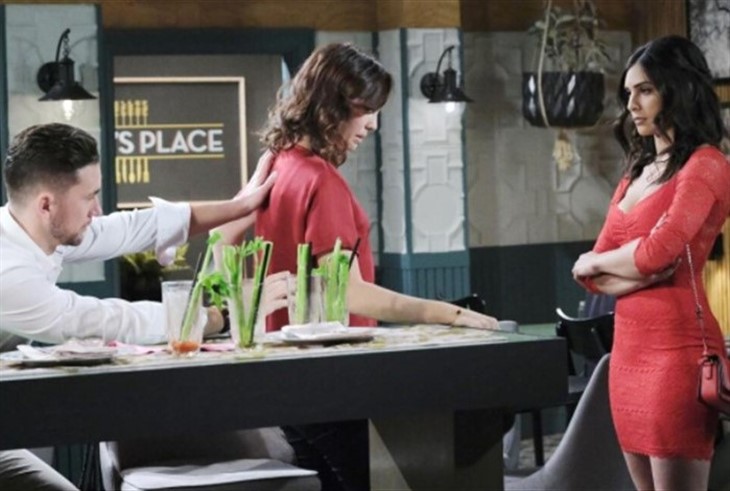 Days of Our Lives (DOOL) spoilers reveal that in Salem Gabi Hernandez (Camila Banus) and Gwen Rizczech (Emily O’Brien) hate each other. However, they have mutual enemies. With Gwen wanting to steal Abigail DiMera’s (Marci Miller) life and Gabi desperate to get “Chabby” out of DiMera so she can take over, could they actually join forces?

Days Of Our Lives Spoilers – Enemies Have Lots In Common

DOOL spoilers reveal that Gabi and Gwen have been enemies since they first met. It all revolved around both of them wanting Jake Lambert DiMera (Brandon Barash). Jake and Gwen had the history together, but Gabi was convinced he was her “dead” husband, Stefan DiMera (also played by Barash). Things continued to get intense between them over other things, as well. Despite hating each other, Gabi and Gwen are a lot alike and have things in common.

For Gwen, she has some sort of issue with the Deveraux family, but most of her hate is directed at Abigail. At one point, she actually said that everything Abigail has should be hers. It seems she is gaining the upper hand because of her affair with Chad DiMera (Billy Flynn). However, Chad DiMera (Billy Flynn) is going to find out the truth from Dr. Wilhelm Rolf (William Utay). Most likely, Gwen will need another ally and it might be the person she least expects.

Days of Our Lives spoilers reveal that Gabi comes back this week and she is on a mission. She wants Jake back, but needs to get rid of Kate Roberts DiMera (Lauren Koslow). She does split them up, but her plan isn’t just about romance. She also makes a business deal with Jake and we think it has to be her way back into DiMera Enterprises. But Kate will continue being an issue, as well as “Chabby.” Like Gwen, Gabi needs an ally and she’s in a town where everyone hates her.

It is possible that Gwen and Gabi could realize that while they will always hate each other, that they might do more damage together than separately. With them both targeting “Chabby,” could they actually join forces? In soaps, there have been many enemies who partnered together to achieve a common goal. It all depends on how important it is to them and for both women, they want nothing more than to come out on top.

What do you think is going to happen when Gabi returns to Salem and the DiMera mansion? Could she partner with Gwen in order to get rid of Chad and Abigail? Will it be the perfect villain duo or will these two women just end up destroying each other?