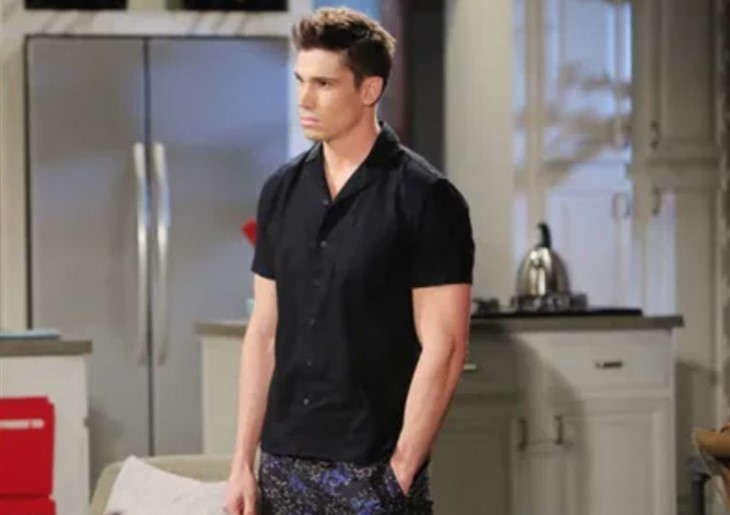 The Bold and the Beautiful (B&B) spoilers document that John Finnegan (Tanner Novlan) showed remarkable composure. He was also incredibly resilient in his response to two pieces of shocking news.

Steffy Forrester (Jacqueline MacInnes Wood) told Finn that she was with Liam Spencer (Scott Clifton) at the cliff house. Then, she added the pregnancy news.

Finn’s joy in hearing that Steffy was carrying a child and hope that the boy, or girl could be his was heart-warming. That scene starkly contrasted with Liam’s pleading at the cabin and Hope Spencer’s (Annika Noelle) expression of deep emotion.

Finn chose to see Steffy’s act in telling him the truth as brave. Her honesty was something he felt was a positive step.

Novlan’s character followed that truly mature response with a genuine act of kindness. He told Steffy that they needed to have a paternity test conducted, with the expectation that the baby would be confirmed as his.

This bodes well for Sinn if, of course, the baby Steffy is carrying proves to be Finn’s. There’s no doubt how much he loves Wood’s character.

Steffy felt a connection to Finn the moment he first came into focus. That description is one that B&B fans understand, as the scene where the doctor was first recognized by his patient in the hospital was memorable.

Finn is the right guy at the right time for Steffy. She’s pulled herself out of the dysfunctional scenario that had her longing for Liam across many years. However, the mistake she and Clifton’s character made is fully problematic.

Viewers now see that Finn wants to have a family with Steffy, even if this circumstance is how that unit begins. But fans also know that if Steffy is pregnant with Liam’s child, then Steam might make a comeback. It’s reasonable to speculate such a revival would only last awhile until Liam left her again.

The Bold And The Beautiful Spoilers – Meanwhile At The Cabin

As Wood and Novlan were performing their dramatic scenes, Clifton and Noelle were also killing it in the cabin setting. Liam’s layered reveal, where Hope was eventually told about Steffy’s pregnancy, was very intense.

Like Finn, Hope was prepared to work through Steam’s romantic reconnect in time. Her first response was to think of their family’s survival.

But Bold and the Beautiful rumors hint the pregnancy news changes the trajectory, leaving Hope’s emotions capped until the paternity test results are known.

SOS is a leading source for everything linked to The Bold and the Beautiful. Check back regularly for B&B soap opera spoilers and comings and goings news!