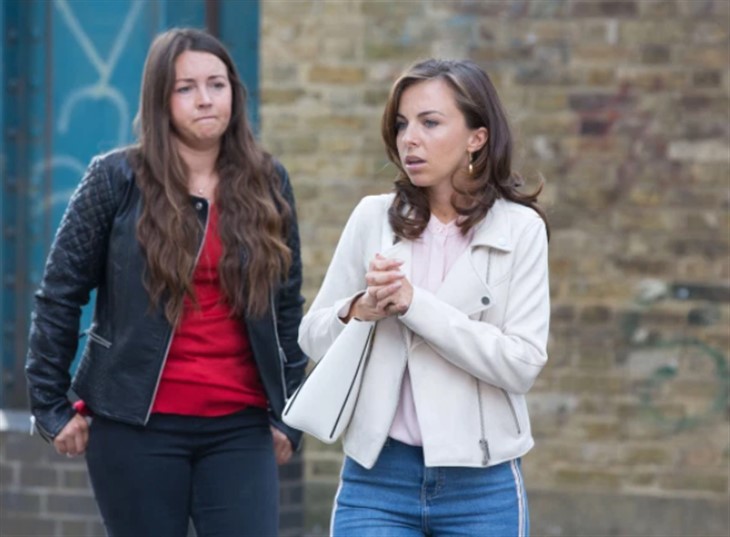 Eastenders spoilers reveal that in Walford Ruby Allen (Lousia Lytton) will tell Martin Fowler (James Bye) about the miscarriage within the next few weeks. With her wanting Stacey Slater (Lacey Turner) gone, she could lie to the police and say Stacey pushed her down the stairs. If Stacey gets arrested, an investigation would uncover Ruby’s baby lies, causing her to lose everything.

Eastenders spoilers reveal that Ruby lied to Martin about being pregnant to make him stay with her. A few weeks later, she found out that she actually conceived. The only problem was hiding the description in how far along she was Martin. Before she could figure that out, Ruby and Stacey got into a fight and the club owner fell down the stairs.

Eastenders spoilers reveal that Ruby miscarried but she hasn’t told Martin yet. She will end up telling him that Stacey and Kush Kazemi (Davood Ghadami) locked her in the office and forced her to take a pregnancy test. He will react with rage and punch Kush. Stacey will feel overwhelmed with guilt and tries to apologize. But that probably won’t be enough for Ruby. She wants revenge and she wants Stacey to suffer. She also wants her gone and far away from Martin. But she’s not going to leave on her own because Ruby’s already tried. So, as her desperation deepens, Ruby could do the unthinkable.

At some point, Ruby will tell Martin she lost the baby and could blame Ruby. If the police are called, Ruby would definitely lie and say Stacey pushed her down the stairs, which caused her unborn baby to die. It’s possible that the police will arrest Stacey, but they will still have to investigate so they can collect evidence.

Eastenders spoilers reveal that when police look into the matter, they will probably uncover Ruby’s pregnancy lies and gestation discrepancy. They might also learn that there is a framed photo of another woman’s fetus hanging on her wall. Stacey will be cleared of any wrongdoing if this happens. However, Ruby could end up losing everything, including Martin. There’s a chance she might even face consequences for falsely reporting a crime. We will have to see if this is what happens or if Ruby’s story will end another way. But the actress did recently tease that Ruby’s tale does not end well.

What do you think is going to happen with Ruby and how long will she pretend to be pregnant this time? How will the truth come out and will she use the miscarriage to drive a wedge between Martin and Stacey? We will have to keep watching to find out.