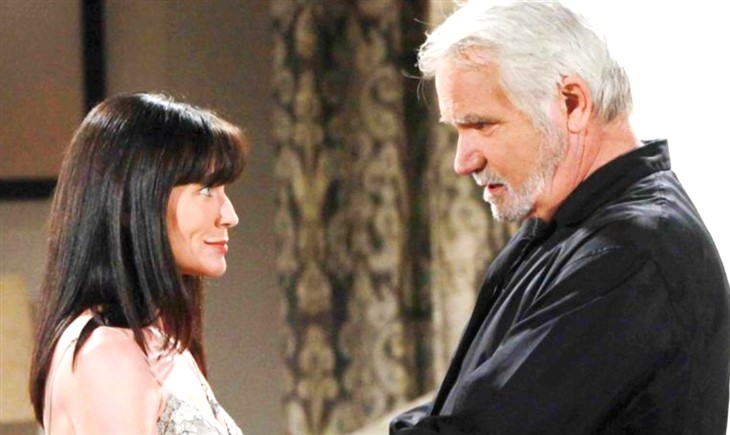 The Bold and the Beautiful (B&B) spoilers document that in Los Angeles Eric Forrester (John McCook) believes that he’s taken control of his life. On a personal level, that’s true. But if he underestimates Quinn Fuller’s (Rena Sofer) ability to remain a thorn in his side, then Eric could suffer on more than a personal level.

Carter Walton (Lawrence Saint-Victor), an unassuming, loyal friend, who was treated like a son, has been turned by Quinn. With that she’s reaffirmed her position as a snake in Eric’s life.

The Bold And The Beautiful Spoilers – Eric Forrester Vulnerable To Attack

Eric left himself open. He believed that the separation period and its conclusion created a reconciliation. But the outcome produced something unexpected.

When Queric reconciled Eric wasn’t able to recapture his feelings for Quinn. He still loved her, but felt betrayed to the point that closeness wasn’t possible.

Sofer’s character eventually began discussing that private matter with Carter, who was put through the wringer by Zoe Buckingham (Kiara Barnes). The crossing of Quinn and Carter’s paths was believable because of their proximity at Forrester Creations and similar emotional circumstances. It was also good soap to pair them, based on the storylines they were part of.

If Carter didn’t exist or she didn’t share her marital details with him there would be no Quarter. However, Carter has become Quinn’s crush and potential new soul mate. But does Quinn have a heart for either man?

The last sentence in the last paragraph is inspired by Brooke’s many accurate observations. Quinn is for Quinn when it comes down to it.

The soon to be former Mrs. Eric Forrester senses that Carter will be willing to do her bidding, just like Eric did. She needs that type of man in order to keep her game rolling.

There is something that must be said. Carter eventually moved away from Zoe. That implies he could cut Quinn off in the future.

First blush attraction can be overwhelming, as viewers know from watching B&B and from experiences in their own lives. But the passage of time does allow perceptions and to change and eventually, different actions to be taken.

For the moment, Carter is like Eric when Queric was first forming. But that means that Carter can also recognize the end of the road before it is reached.