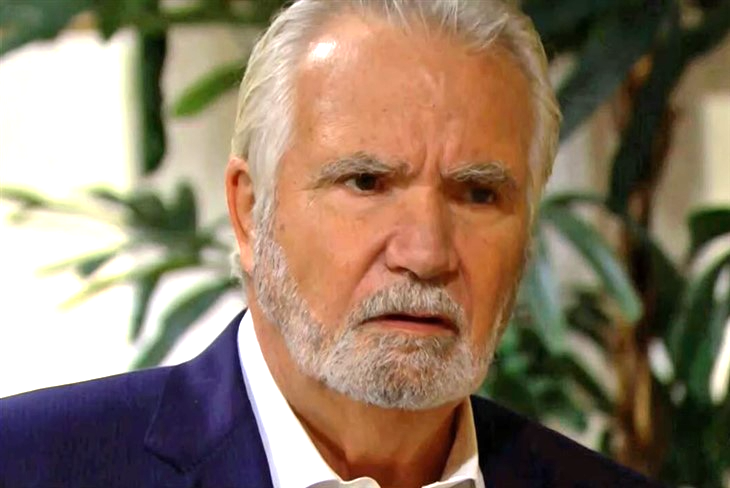 The Bold and the Beautiful (B&B) spoilers for Monday, June 28, 2021, reveal in Los Angeles Eric needing Carter to do something very important.

The Bold And The Beautiful Spoilers – Carter Walton Shocked By Request

All Carter (Lawrence Saint-Victor) wants to do is pretend he never slept with Eric Forrester’s (John McCook) wife — twice. He wants to have the life he imagined with Zoe (Kiara Barnes) with that little slip-up being nothing more than an awful mistake that won’t haunt him for the rest of his life.

All Eric wants is to make Quinn (Rena Sofer) happy now that he’s forgiven her for her part in the Ridge (Thorsten Kaye) and Shauna (Denise Richards) Las Vegas fake wedding disaster. And Quinn wants a vow renewal to make him happy. And we all know who the resident wedding officiator in Forrester Land is. That’s right, it’s Carter and he doesn’t quite know what to say when Eric asks Carter to officiate when he and Quinn renew their vows.

Carter doesn’t know how to say no but he also doesn’t know how he’s going to stand there and do this thing for a man who has been like a father to him knowing what he did with this man’s wife. This is going to be quite the awkward Forrester living room wedding, indeed. (Aren’t they all?)

Justin (Aaron D. Spears) is certainly enjoying his new life in charge of Spencer Publications. He loves Bill’s (Don Diamont) big chair and that amazing view he gets of Los Angeles and believes he can get used to this as long as Bill and Liam (Scott Clifton) stay behind bars for a very long time. Of course, that also entails keeping Thomas’s mouth shut about what really happened to Vinny (Joe LoCicero).

He doesn’t count on Wyatt (Darin Brooks) stopping by the office to see how his father and brother’s defense is coming along. Wyatt is quite curious by the scene he sees with Justin appearing to have taken over anything. He finds the scene to be a bit suspicious and questions Justin, but does Justin manage to cover for himself well? Stay tuned to The Bold and the Beautiful weekdays to see how these stories play out.