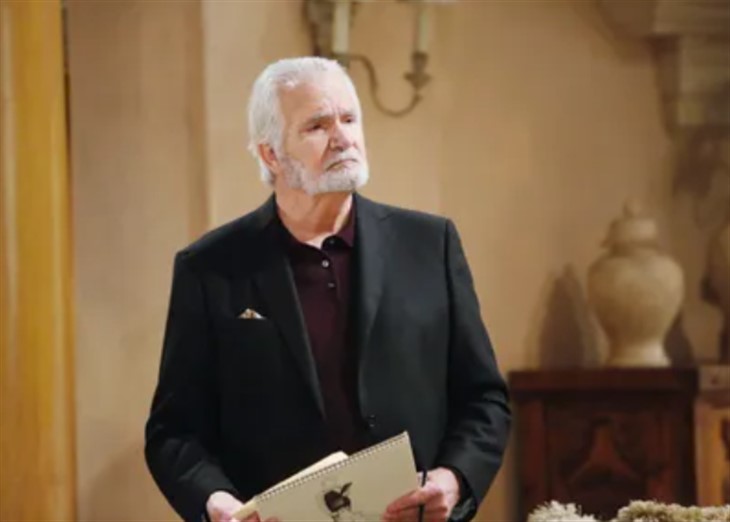 The Bold and the Beautiful spoilers reveal that Eric Forrester (John McCook) asks Carter Walton (Lawrence Saint-Victor) for a special favor. Since Quinn Forrester (Rena Sofer), it must be for Carter to officiate. He will likely agree to do it, but might change his mind once he stands in front of the couple. Will he blurt out the truth, as well as his real feelings in front of everyone?

The Bold And The Beautiful Spoilers – Quinn Forrester’s Idea

B&B spoilers reveal that Quinn will suggest to Eric that they celebrate their revitalized marriage. She wants to have a vow renewal ceremony. Of course, her real intention is to show everyone, mainly Paris Buckingham (Diamond White), that she’s no threat to Zoe Buckingham’s (Kiara Barnes) relationship.

Eric will think it’s a splendid idea and is so happy with Quinn and his marriage right now. The first person — and the only person — he considers to officiate is Carter. He will ask him for a special request and this must be it. Carter will feel a pang of guilt when Eric asks him for the favor. However, Carter will probably agree to officiate the vow renewal ceremony.

The Bold And The Beautiful Spoilers – Carter Walton’s Conflict

The Bold and the Beautiful spoilers reveal that Carter wanted to confess the truth last week. However, Quinn stopped him. She thinks being honest is a terrible idea. She wasn’t concerned about Carter’s job, friendships, respect, or relationship. All she cared about was protecting her own marriage.

However, Carter isn’t a dishonest person under normal circumstances. His is plagued with guilt and there is only so much more he can take. We already know that Quinn daydreams about her fling with Carter. We imagine that Carter might be thinking about Quinn more often than he should, as well.

Once Carter gets up in front of Eric and Quinn, he will look at the woman he slept with and think about their time together. He might not be able to go through with the vow renewal ceremony. It’s not just about confessing the truth, though. It is hinted that Carter and Quinn have genuine feelings for one another. Could he admit to the fling, as well as his real feelings, in front of everyone?

What do you think is going to happen? We know the vow renewal will blow up. However, will it be due to Paris, Brooke Logan Forrester (Katherine Kelly Lang), or will it be by Carter? How will Eric react to the bombshell and could Quinn admit to having feelings for Carter, too? We will have to keep watching the CBS soap to find out what happens next with this storyline.