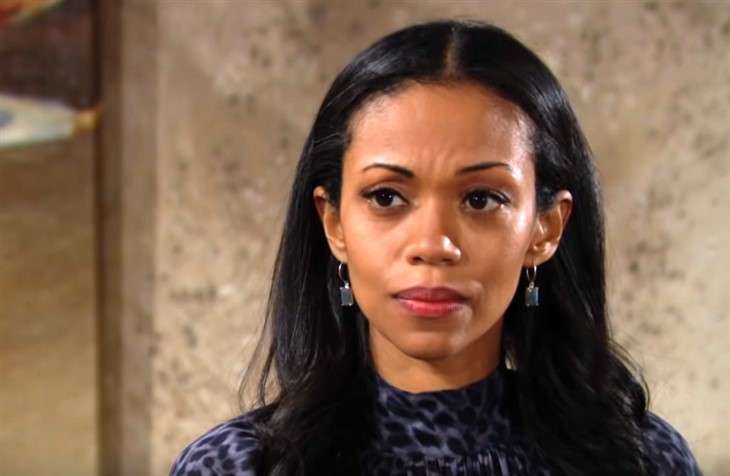 The Young and the Restless (Y&R) spoilers document that Amanda Sinclair’s (Mishael Morgan) decision to challenge Sutton Ames (Jack Landron) resulted in her removal as his lead counsel. That outcome doesn’t deter Amanda’s intent to learn how her father really died.

Richard Nealon (no actor’s name known for this retrospective role) was initially believed to have been killed in a car accident. However, a recent claim blames Sutton for Richard’s death, with the implication that a Newman Enterprises based bribery scheme triggered the crime.

However, Amanda’s ongoing search for the truth will surely result in a reveal. Might that include a stunning outcome where she learns that her father is alive?

The Young And The Restless Spoilers – Few Facts Known So Far

Naya Benedict (Ptosha Storey) has admitted to being Amanda’s biological mother. She also told Morgan’s character that her cousin, Rose Turner (Leslie Stevens), wasn’t capable of raising the twins. That’s why Rose was only given Hilary Hamilton (Morgan) at the time and Amanda went into the foster care system.

Unless a maternity test proves otherwise, Naya is Amanda’s mother, Sutton is her grandfather, and Imani Benedict (Leigh-Ann Rose) is her half-sister. But Richard’s connection to Amanda remains wide open.

Like anyone, Richard had his own ancestors and other family members. But whether any of them can be tracked down remains to be seen on Y&R.

Sutton was adamant. He didn’t want Amanda to use what she’s learned about Richard in court. She wasn’t to mention that Richard asked Victor Newman (Eric Braeden) for advice about pursuing his daughter’s whereabouts.

Richard’s request, regarding the search for Amanda approximately thirty years ago, included an intriguing element. He appears to have believed that Naya gave birth to one baby, rather than twins. Why was that?

As for Sutton’s stance, it isn’t logical. He could plausibly convince the court of his innocence and avoid jail time by allowing the information Amanda discovered about Richard to be used as part of his defense. So, Amanda suspects that Sutton is withholding something important for a purposeful reason.

The Young And The Restless Spoilers – Richard Nealon Is Alive?

This would be a stretch for the audience to accept. But if Richard never died, then Sutton may have paid him to go away and never return. That alone could be the rub.

Sutton not only resists any introduction of Richard’s connection to his family into court proceedings, he also doesn’t want Amanda pursuing the topic. Possibly that’s because a dig into her father’s grave could prove that it’s empty.