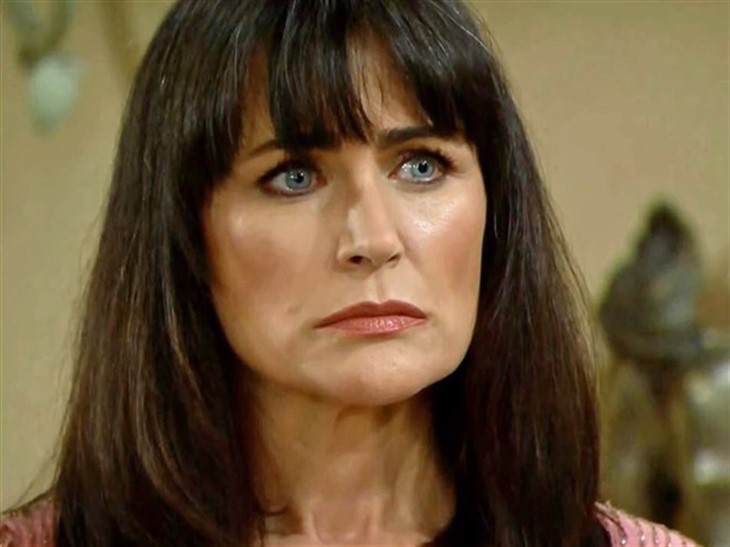 The Bold and the Beautiful (B&B) spoilers document that in Los Angeles Quinn Fuller Forrester’s (Rena Sofer) decision to once again go to Carter Walton’s (Lawrence Saint-Victor) home means that Eric Forrester (John McCook) will need to respond firmly. He’s already told the soon to be Quinn Fuller that divorce is happening. But Carter was given a choice.

Saint-Victor’s character believed that he would be fired if Eric ever learned that he was with Quinn. Carter told her that when they initially believed Quarter was a mistake.

However, both people’s lives have quickly advanced to the point that Quinn doesn’t care what Eric thinks and Carter, as inspired by Quinn’s disrespectful attitude, offered her a condescending impression of Eric’s warning to him.

Carter was told by Eric, in front of Ridge Forrester (Thorsten Kaye), that he had to stay away from Quinn. If he didn’t, then his job as lead counsel at Forrester Creations was gone. Viewers assumed the Board seat would be pulled as well.

Eric and Ridge went to work the next day believing that Carter would have beat them into FC. He didn’t, which was unexpected. Neither man considered that Quinn’s hold deepened to the point that it has.

If Quinn can’t remain a Forrester and live the ultimate plush life in the mansion, then those who she now sees as enemies will need to feel some type of disruption, as an opening salvo. So, forcing Carter to go against his better judgment is step one.

Logically speaking, Carter is capable of being with many available ladies. He ideally would be with someone who isn’t like Zoe Buckingham (Kiara Barnes). She considered Carter as her fallback option.

Carter shouldn’t want to be with Quinn, who not only has a deep history of trouble, but just betrayed the man she claimed to love like no other.

Bold And The Beautiful Spoilers – Eric Forrester Is Tested

Eric will certainly learn about Quarter’s continuing connection. Quinn could tell him that or make sure it’s known, as a form of face-slap.

McCook’s iconic character will need to take a stand when the reveal drops. He can’t possibly keep Carter employed. Fans are right to wonder if Eric will learn the news before, during, or after Carter represents him in the Queric divorce?