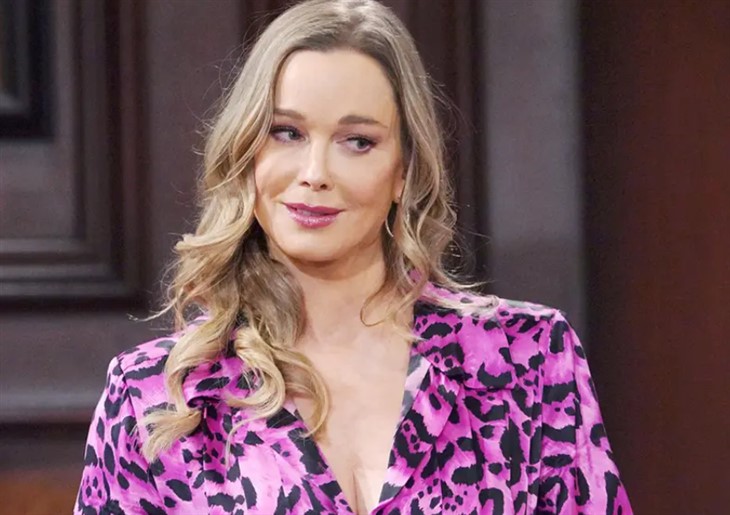 The Bold and the Beautiful (B&B) spoilers and updates reveals Donna Logan (Jennifer Gareis) wants to help the ones that she cares about. Hope Spencer (Annika Noelle) has needed Donna’s help with taking care of her children Beth Spencer (River Davison) and Douglas Forrester (Henry Joseph Samiri).

Hope is trying to find a way to deal with the fact that her husband Liam Spencer (Scott Clifton) could be facing going to jail long term for accidently killing Vincent Walker (Joe LoCicero). Liam and his father Bill Spencer (Don Diamont) where out for a drive when Liam accidently hit Vinny with his car. Bill covered up the accident and left the scene with Liam. However Thomas Forrester (Matthew Atkinson) and Justin Barber (Aaron D. Spears) know that Vinny stepped in front of the car on purpose so that he could frame Liam for his death. Vinny thought that he was helping Thomas get Hope by getting Liam in trouble with the law.

Donna wants her sister Katie Logan (Heather Tom) to be happy. Katie is devastated that Bill is in jail. She wants him to be free to come back home for their son Will Spencer (Finnegan George). Katie has told Will about the trouble that Bill is in. Will is having trouble dealing with the fact that his father is in trouble with the law. Donna could come to show her support to Katie and Will.

Donna and Eric Forrester (John McCook) were married at one time. Eric has had some trouble with his marriage to Quinn Forrester (Rena Sofer). He believes that his marriage to Quinn is back on track. He does not know that Quinn and Carter Walton (Lawrence Saint-Victor) had a one night stand. Eric will be devastated to find out that Quinn cheated on him with another man. Donna will want to help Eric when he finds out that Quinn was unfaithful to him with Carter. Eric will be even more devastated because he respects Carter and thinks of him like he is family. Donna can help Eric deal with finding out the truth about Quinn and Carter.

The Bold and the Beautiful Donna may be able to help the ones that she cares about in their time of need. Donna may be able to get Justin to let Wyatt run Spencer Publications. She may be able to convince him to help Bill and Liam. Could Donna be the one to help Liam and Bill because she gets Justin to do what he needs to get them out of jail? Donna loves Katie and Will. Can Donna help Katie and Will to cope with not having Bill with them? Donna will want to support Eric. Could Donna and Eric come back together because he finds out about Quinn and Carter? Tune into Bold and the Beautiful to find out how Donna helps the ones that she cares about deal with their problems.