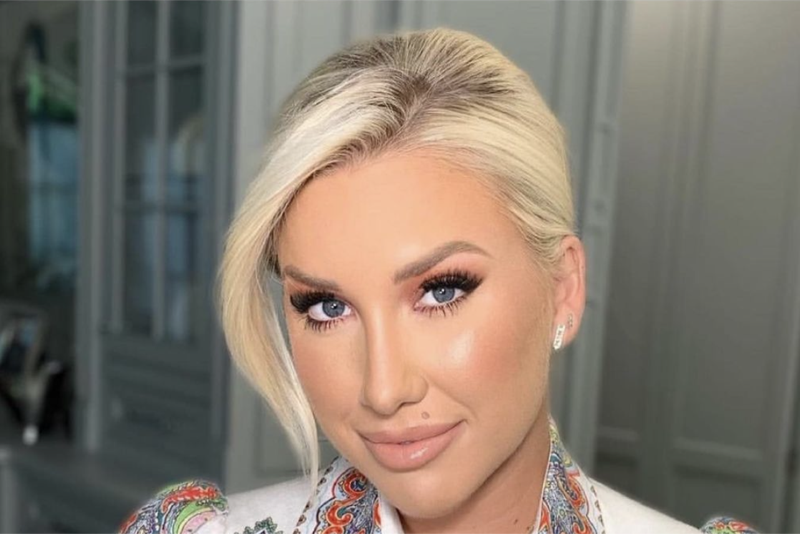 Savannah Chrisley fans can’t get over how beautiful the Chrisley Knows Best star looks these days. Mind you, presumably she can’t walk around looking like a bedhead since the launch of Sassy by Savannah. Her beauty products line really seems successful and she has the figure and poise to promote it. In June, she shared some particularly stunning photos of herself, and USA Network fans admit that they’re obsessed with her looks.

Recently, the Chrisley Knows Best star and owner of Sassy by Savannah rocked leather and she pulled it off perfectly. She shared a photo earlier this week that she revealed shades of gray and black that left fans gasping. After quoting  Ruth Bader Ginsburg, she wrote, ” Time to dominate in a mans world 😉.” Her next post revealed her in a stunning blue color with white edging. In that post, she looked ready to take on the word, never mind men. Both of those outfits looked rather formal, but the one she shared on June 30 got fans saying how obsessed they feel about her beauty these days. In it, she rocked a peach-colored outfit for casual wear.

Not all fans like it that Savannah Chrisley looks so beautiful these days. Back on June 17, The Blast reported that some fans think she’ll only make her ex, Nic Kerdiles jealous. Therefore, hopes of a reunion between them fade. However, it’s not clear that Todd’s daughter really hopes for that anyway. Mind you, she never closed the door on the idea completely. Nevertheless, right now, she focuses on her business of fashion beauty. 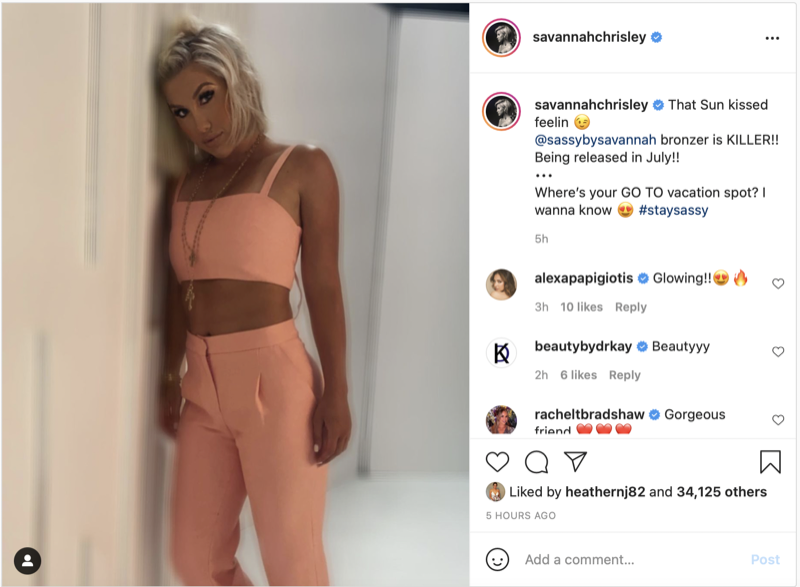 One USA Network fan seemed beyond finding the right words when they saw the latest post. The caption read, “That Sun kissed feelin 😉.” Actually, she promoted an upcoming Sassy Savannah bronzer that should be available in July. Then she added, “Where’s your GO TO vacation spot? I wanna know 😍.” Sometimes, fans think the beautiful woman overdoes the bronzer, but others admit it really looks good on her. In fact, her very light hair gives a nice contrast, other fans think.

One Chrisley Knows Best fan said to Savannah Chrisley, “❤️❤️❤️❤️❤️❤️😍😍😍😍😍😍😍🔥🔥🔥🔥🔥🔥 Wow. You are more beautiful than all the stars in the sky.” Wow! That’s a pretty mag compliment, you might think. But, more followed and one follower said, “What is the brand of your outfit. 😍obsessed.” Meanwhile, another smitten follower wrote, “Wish I was the sun. I would be kissing you all the time 😋🔥🔥🔥❤️.”

Of course, beauty like Savannah Chrisley flaunts probably makes other not=so-perfect people feel a bit jealous. So as usual, a Debbie Downer popped up in the comments. The comments read, “Is she trying to be a model? Shes [sic] cute, but…” Well Nobody took the slightest bit of notice so it’s not likely to rock Savannah’s world.

Remember to check back with us often for more news and updates about Savannah Chrisley from USA Network’s Chrisley Knows Best.