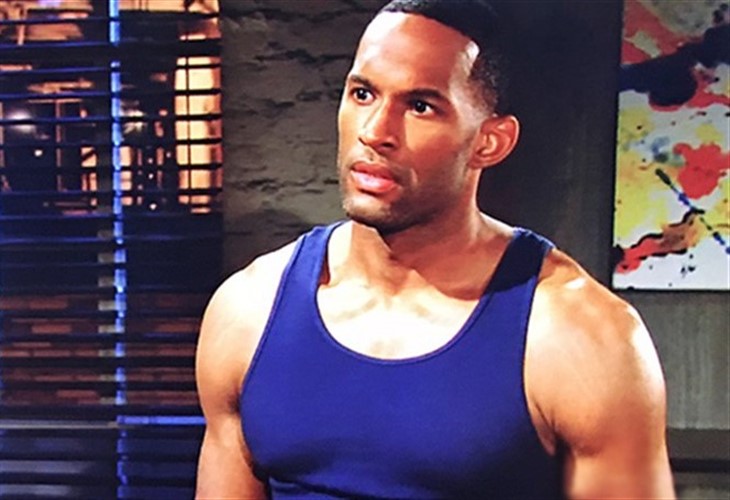 The Bold and the Beautiful (B&B) spoilers for Friday, June 18, 2021, reveal in Los Angeles Carter having a bright idea that Quinn doesn’t like at all.

It’s only a matter of time before his affair with Quinn (Rena Sofer) comes out and Carter (Lawrence Saint-Victor) knows it. After all, it’s becoming more complicated by the day. Shauna (Denise Richards) knows what happened and lied to everyone that she is the person Zoe (Kiara Barnes) saw Carter in bed with when she barged on in. She even lied to Flo (Katrina Bowden) about it when Paris (Diamond White) blabbed the news.

But Paris was wrong to blab before eavesdropping on a conversation between Quinn and Shauna where they discussed the truth of the affair. Quinn did the best she could to talk Paris out of telling Zoe and Eric (John McCook) everything but Paris was not quite convinced, even when Quinn threw Zoe under the bus and told her that her sister and Quinn caused Paris’s stomach issues on her first date with Zende.

Now Carter just wants this whole affair over with, so to speak. He tells Quinn they have to come clean because the lies just beget more lies and he can’t take the guilt anymore. He is not a seasoned liar like Quinn, so that may be the reason why she is totally against this idea. Will he be able to talk her into it?

B&B Spoilers – Thomas Forrester Is There For Hope Logan

Thomas (Matthew Atkinson) expected to blast Liam (Scott Clifton) and not let him get a word in edgewise when he went to visit him in jail. He couldn’t believe Liam is the one who killed his best friend Vinny (Joe LoCicero). But Liam is the one who barely let Thomas get a word in edgewise and apologized over and over again. He also asked him to be there for Hope (Annika Noelle) and the kids.

Who is Thomas to argue with that? How can he not abide by Liam’s wishes and be the friend and support Hope needs? He might feel a little awkward about it but on Friday Thomas is right there with Hope and promises to be her rock. Will this lead somewhere else down the road? Is it time Hope finally breaks free from Liam as Steffy has? Stay tuned to The Bold and the Beautiful weekdays to see how this story plays out.