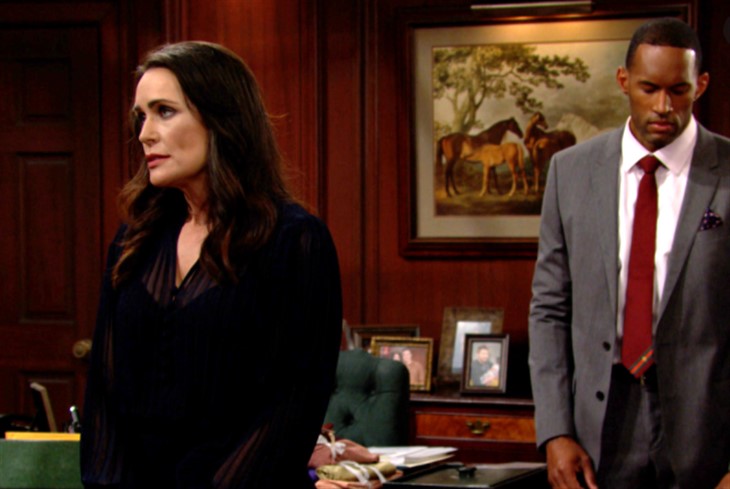 Viewers of The Bold and The Beautiful will recall that Shauna Fulton (Denise Richards) couldn’t keep the lie going after Paris questioned her as to why she didn’t tell her daughter about her fling with Carter. Shauna had grabbed Quinn’s jacket to cover for her bestie when her sordid secret was about to be exposed by Zoe Buckingham (Kiara Barnes) who had come to Forrester Creations to confront Carter about who the other woman was.

She’d walked in on Quinn and Carter in bed but Quinn had dived under the bed – but Zoe figured out what was going on when she saw Quinn’s clothes and underwear, including the jacket on the floor. But then the lie just kept going and going and increasing in size and in people lied to, and Shauna finally just told Paris the truth but asked her to keep quiet. After all, Carter and Zoe had been broken up when this happened so it wasn’t really cheating – but then there was Quinn cheating on Eric Forrester (John McCook)! Shauna confronted Quinn about having to come clean, however. Now Quinn has to make sure Paris keeps what she knows to herself and not start a snowball of ruined lives that is sure to turn into an avalanche! Quinn goes to Paris to try and ensure her silence as soon as Shauna admits she told her the truth.

Quinn of course has to let Carter know that their tea is spilled and first gives him a quick warning that Paris knows. She won’t want to rat out Shauna so she may just tell him that Paris figured it out. She and Carter approach Paris confidentially, although it is Quinn that does most of the talking. She assures Paris that it was only a short fling and now she is back solid with Eric and Carter is solid with Zoe, and they don’t want to ruin that. She explains that the two of them fell into temptation, with Carter stinging over Zoe’s potential betrayal with Zende Dominguez (Delon de Metz) and Quinn being sexually ignored by Eric, who had not yet been able to forgive her for her many lies and manipulations over the years they had been together.

Carter doesn’t want to lose Zoe now that they have become re-engaged, and Quinn doesn’t want to ruin what she has recaptured with Eric. Neither wants to hurt Zoe, who would take it as a double betrayal since it happened when Quinn had intended to be trying to convince Carter to take Zoe back. Paris claps back that Quinn is no friend of Zoe and Quinn agrees but her original intentions were to help her. Quinn strongly maintains and Carter strongly agrees that there is no future for the two of them together and Quinn wants to stay with Eric and Carter wants to stay with Zoe!