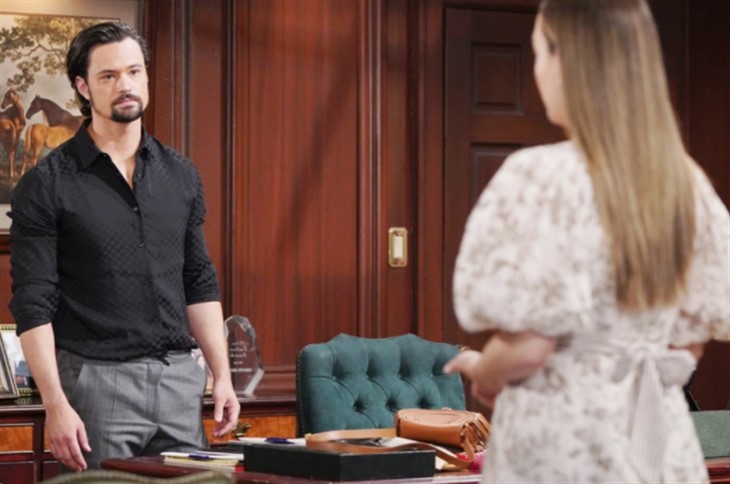 The Bold and the Beautiful (B&B) spoilers indicate that any chance of a Thomas Forrester (Matthew Atkinson) and Hope Logan (Annika Noelle) romance will be squashed.

Although they’re not together, B&B has continued to foreshadow a possible relationship between Thomas and Hope. As B&B viewers are aware, Thomas had a dangerous obsession with Hope, which caused him to commit various misdeeds.

Last year, Thomas’s redemption began after he suffered a traumatic brain injury. Hope was by his side as he recovered, and it kickstarted theories that Thope may still happen. However, Hope’s heart belongs to Liam Spencer (Scott Clifton), a fact Thomas accepted.

Yet, it’s obvious Thomas still has feelings for Hope. But his love for her may vanish when he discovers she knew Liam’s secret.

Thomas has been going through a difficult time as he mourns the death of his friend Vinny Walker (Joe LoCicero). The two pals had a falling out weeks ago when Vinny tampered with the DNA results of Steffy Forrester’s (Jacqueline MacInnes Wood) baby. Thomas was furious Vinny would do something so despicable to his sister.

Yet, despite his anger, Vinny was one of Thomas’s close friends. His death has hit Thomas hard, and the Forrester heir wants answers about Vinny’s demise.

Well, he’s about to get them when Liam confesses to running over Vinny.

When Thomas learns Liam is responsible for Vinny’s death, he’s going to be furious. The two men strongly dislike each other. Thomas’s hatred for Liam stems from the pain he’s caused Steffy and Hope due to his waffling. Thomas is tired of everyone treating Liam like a saint and is thrilled to be getting his comeuppance.

With Liam being behind bars, one would assume this would be the perfect opportunity for Thomas to make his move on Hope. However, Thope fans shouldn’t get too excited. This current situation with Liam could be the thing to end any chance of a Hope and Thomas pairing.

Thomas is no doubt going to be enraged when he learns details of the night of Vinny’s death. He’ll be upset that Liam and Bill Spencer (Don Diamont) didn’t do anything to help Vinny, they just left him in the road to die.

While Thomas wants Liam to be punished for his actions, Hope will have a different view.

Hope was stunned when Liam confessed to running over Vinny. Yet, when she heard the whole story she realized it was an accident. If Liam was in charge that night, he would’ve done what he could to help Vinny. But it was Bill who made the decision to leave. In her mind, Liam’s a victim of Bill’s cover-up.

Thomas is going to be aghast at Hope defending Liam. For someone who preaches the importance of honesty and doing the right thing, Hope will be a hypocrite when it comes to Liam.

Seeing how Hope’s reaction in this situation will have Thomas rethinking his feelings towards her. He used to have a love for her, but that’s going to unravel as this storyline continues.