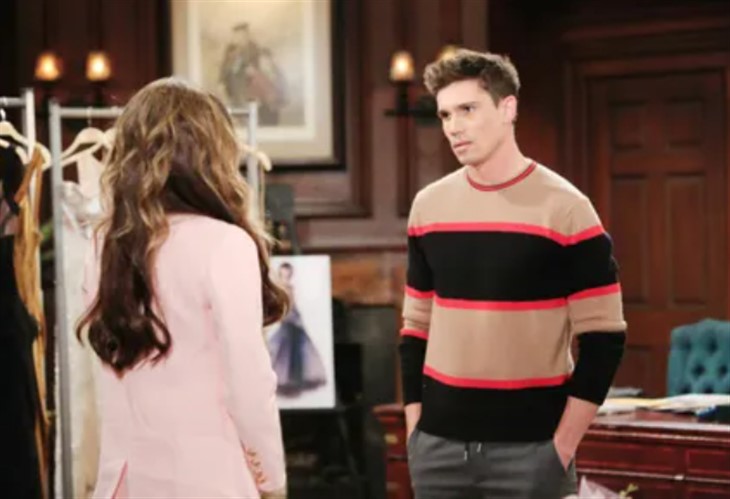 The Bold and the Beautiful (B&B) spoilers reveal some stunners in Steffy’s supposedly idyllic and happy life. Uh-oh?

The Bold And The Beautiful Spoilers – Little Steffy, Happy At Last

Steffy Forrester (Jacqueline MacInnes Wood) finally thinks she has it all. After years of pining after Liam (Scott Clifton) and taking him back anytime, Hope (Annika Noelle) didn’t seem to want him, she is finally free of that awful man who could never seem to make up his mind about anything. Well, kinda free. She is still a mother to one of his children and now he’s in jail, so that will be something new to explain to Kelly.

But no mind for Steffy. She has yet another baby to mother. She couldn’t wait to give baby Kelly a sibling and kinda adopted a baby she named Phoebe, who turned out to be Liam’s other daughter, Beth because the man gets around. Now she has her own baby without Liam. Well, not quite her own. She has to share this one with its father, Finn (Tanner Novlan).

That’s ok. Finn is the greatest man who ever lived, according to 2021 Steffy. He is kind to her and easily forgives her whenever she messes up. Plus, he’s handsome and a doctor, and a loving father to their brand-new child.

B&B Spoilers – Is There Anything Else Steffy Forrester Needs To Know?

What else is Finn? Does Steffy know? Does anyone know? She fell into bed with him, accepted his marriage proposal, and had his child while barely knowing a thing about him. Fans also don’t know a thing about this guy but they’ve been speculating for months.

The Bold and the Beautiful spoilers summer preview reveals that we will soon learn a whole lot more about Dr. Finn than we ever imagined, but what will we learn. Is he a good guy or a bad guy? Does he have a secret past? A crazy family? Other kids out there? The possibilities are endless. Of course, it would up the stakes if Finn is related to another character we know and that’s what we’re hoping for. Stay tuned to The Bold and the Beautiful weekdays to see how this story plays out.