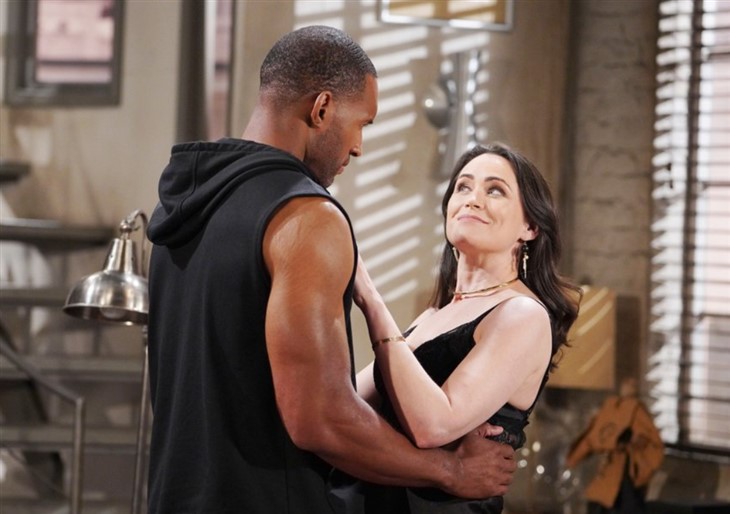 The Bold and the Beautiful (B&B) spoilers document that in Los Angeles Quinn Fuller (Rena Sofer) appears incapable of not causing trouble in other people’s lives. Carter Walton (Lawrence Saint-Victor) recognizes that fact, when he’s able to break the increasingly strong hold she has on him.

Meanwhile, Eric Forrester (John McCook) believes that Carter has learned a harsh lesson and has chosen to remain loyal to him. That’s not how it is, as B&B fans are seeing.

Something has to give, as having Eric remain unaware of what’s going on stretches the suspension of disbelief principal too far. Seeing the dress on Carter’s couch and not assuming it was Quinn’s was a bit too much.

The Bold And The Beautiful Spoilers – Attorney Involved With Opposing Client

How can Carter possibly agree to be Eric’s lawyer in the Queric divorce? He’s personally conflicted.

Carter wouldn’t necessarily have to tell Eric that he can’t handle his case because he still has feelings for Quinn, though that would be honest. Instead, he could rightfully state that he has a moral conflict of interest in having been the other person who helped Quinn break her marriage vows.

Fans are having a hard time accepting Carter as Eric’s attorney, even knowing that this is soap. So, it would seem that a course correction, of some type, is in order.

At the same time that Eric was doubting whether he should stay with Quinn, she was losing patience and interest in him. The reason why she began talking with Carter was to test the waters.

Both people jumped willingly into the deep end and have been swimming. Their ongoing connections shout, rather than imply, that Quinn and Carter will be a couple when the Queric battle has been resolved.

Eric will have surely fired Carter by that point in the plot. So what will Forrester Creations lead counsel do then?

The Bold And The Beautiful Spoilers – Spencer Publications Has An Opening

Justin Barber (Aaron Spears) wanted Bill Spencer’s (Don Diamont) forgiveness. He didn’t get it and then bee-lined to Ridge Forrester (Thorsten Kaye), who is considering Justin’s pledge of loyalty in exchange for his ongoing freedom.

A clear swap of attorneys is in play. Justin to Forrester Creations, though maybe not as its lawyer to begin with. Then, Carter is hired by Bill after Eric throws Saint-Victor’s character out?

The above would be intriguing soap and deserves to happen. Here’s hoping that it does.