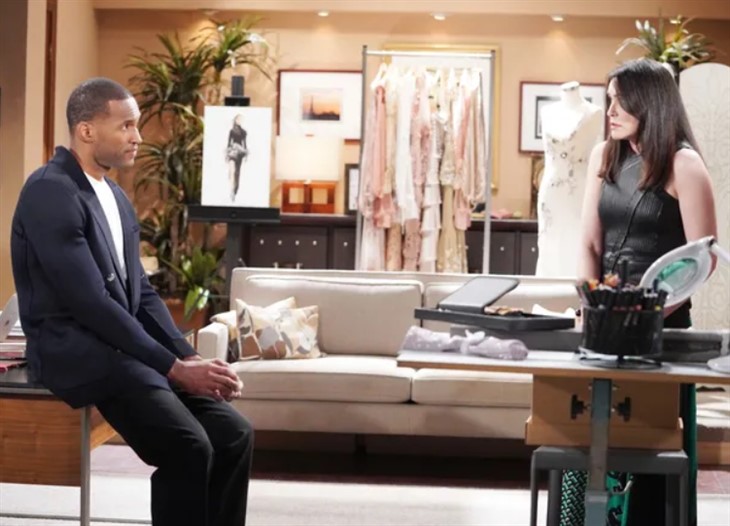 The Bold and the Beautiful (B&B) spoilers reveal that Carter Walton (Lawrence Saint-Victor) won’t be able to honor Eric Forrester’s (John McCook) demand. He can’t stay away from Quinn Forrester (Rena Sofer) as he agreed. In fact, the actor stated that Carter will be haunted by Quinn. So, what does this mean for his career, as well as “Quarter?”

The Bold And The Beautiful Spoilers – Carter Walton’s Conflict

B&B spoilers reveal that Carter is thankful to still have his job at Forrester Creations. However, keeping his promise to follow Eric’s conditions will be easier said than done. It makes it even more difficult when Quinn stops by his apartment. He tells her that he is unable to give her legal advice. However, before Quinn goes to leave, Carter can’t stop himself from kissing her. Things will progress to the next level, just as they did before “Quarter” was exposed.

In the new issue of Soap Opera Digest, Saint-Victor explained that Carter is haunted by Quinn.

“Carter finds himself haunted by her. When Eric gave Carter the portrait, it was almost like a test of loyalty. I don’t know how Carter is processing this. After Carter takes the portrait, it’s not like he’s going to hang it in the loft… Is he supposed to throw it away like she’s a piece of garbage? No! But that’s Carter’s problem…”

The Bold and the Beautiful spoilers reveal that Carter and Quinn won’t be able to stay away from each other. Even though Carter is trying to do the right thing, he isn’t exactly sure what that is. Is the right thing honoring Eric’s demands and kicking Quinn out of his life? Or is it following his heart and admitting that he’s in love with Quinn despite the chance it could ruin his career?

B&B Spoilers – From Fling To Commitment?

Even though “Quarter” started off as an unexpected fling, it seems that they are on the fast track to commitment. This week, Quinn shocks Eric with her response to the divorce. Maybe he expects her to beg and grovel, which she won’t do now that she has Carter. It is also teased that by the end of the week, “Quarter” will share an epic and defining moment. Could that mean that the two decide that they are in love? Or will they end up going public with their relationship no matter what the consequences maybe?

What do you think the future holds for Carter and Quinn? We will have to keep watching the CBS soap to find out what happens next with this storyline.