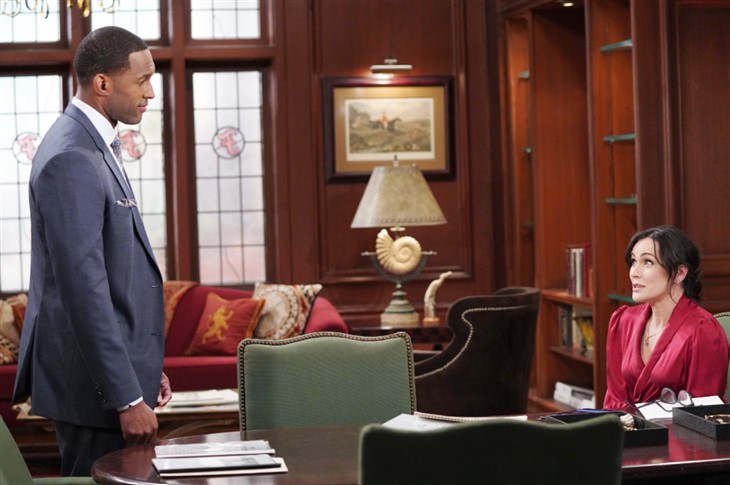 The Bold and the Beautiful (B&B) spoilers document that Carter Walton (Lawrence Saint-Victor) and Quinn Fuller Forrester (Rena Sofer), her name for the moment, have no leverage. They want Paris Buckingham (Diamond White) to keep what she’s learned to herself, but this explosive information clearly needs to be told.

Paris’ presence to date has been soft. She’s Forrester Creations’ newest employee who has a smile on her face and is pursuing idealistic goals. Recent college graduates are like that. But most aren’t working in their first major job that also involves holding power over the company’s Chief Operating Officer and the founder’s wife.

Zoe Buckingham (Kiara Barnes) is sharp. Eric Forrester (John McCook) is savvy. But neither character is wise to Quarter. Paris is and that’s a mega problem on B&B that simply can not be wished away.

It’s actually sad to see Zoe and Eric so joyful. They believe that their perceived soul mates are fully committed to them. That’s true now but wasn’t in Carter’s apartment a handful of weeks ago.

It’s fully understandable that Carter and Quinn are panicked. They know that Zoe will react with deep emotion if Paris tells her the truth. And who wouldn’t, considering Quinn’s failed promise to help Zoe repair Zarter?

Shauna Fulton (Denise Richards) relayed the bad news to her best friend in Eric’s spacious living room. That made Quinn race to FC and literally drop to her knees to plead with Paris. As Sofer’s character said, she has made so many mistakes through the years that Eric can’t possibly forgive this one.

It must be said that Quinn and Cater are remorseful. Their after-the-fact shared outlook doesn’t change the past and has resulted in this secret needing to be taken to the grave, a phrase Quinn referenced on more than one occasion.

The Bold And The Beautiful Spoilers – Paris Buckingham Has The Hammer

However, Paris didn’t need to dig as Quinn’s initial tell to Shauna opened the grave and then their talk in FC’s executive suite handed Paris the reveal. Whether she chooses to demonstrate compassion, which is Eric’s famous trait or feels compelled to tell her sister what happened, will soon be seen on B&B.

The Young And The Restless (Y&R) Spoilers: Is Ashland Locke Faking His Cancer – What’s His End Game?