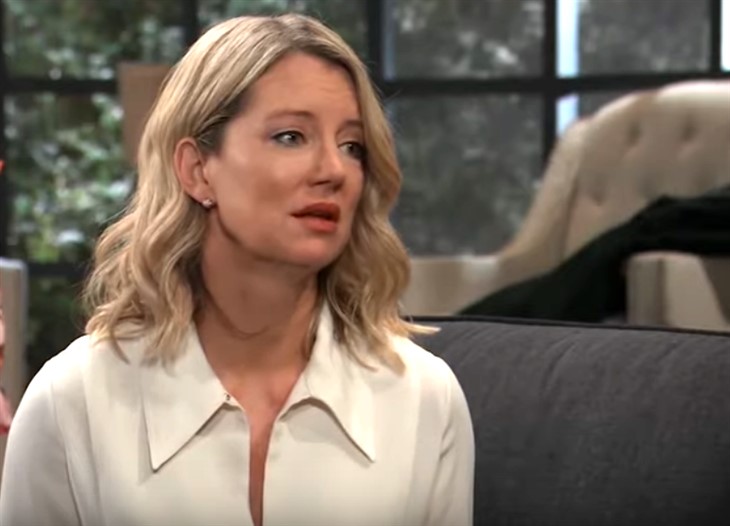 Nina (Cynthia Watros) promised Maxie (Kirsten Storms) she wouldn’t tell anyone her secret that the baby Brook Lynn (Amanda Setton) calls Bailey is really Louise. However, she didn’t promise her she wouldn’t go to Brook Lynn and angrily question her decisions.

Brook Lynn is sure surprised when Nina calls her over and she questions her on why she ever lied to Valentin (James Patrick Stuart) about being pregnant and admonishes her for letting him get attached to a baby who isn’t his. Nina might understand why Maxie is doing what she’s doing. She’s terrified for her life and her baby’s life because she fell for a madman, but Brook has no reason to hurt Valentin like this. How will Brook defend her poor decisions?

Meanwhile, Maxie still seems to want to hightail it out of town as she tells Sasha (Sofia Mattsson) she is taking a step back from work for a while.

Valentin’s business life may have lost something since he will no longer be the CEO of ELQ, but he thinks his personal life is doing just fine. He has a new baby girl to love and even got Anna (Finola Hughes) to kiss him after decades of longing for her.

On Thursday, Anna and Valentin discuss what’s happening between them. Anna tries to deny that anything is happening at all, but Valentin insists something is. Will Anna admit she has feelings for this man and take things further or will she continue to pretend they are nothing but friends?

It looks like the Metro Court pool is up and running as Brando (Johnny Wactor) and his mom seem to be hanging out there talking about his future. That’s when Carly (Laura Wright) walks up to them and wants to have some angry words with Gladys (Bonnie Burroughs). Is this a delayed confrontation for when she lied and said Jason (Steve Burton) killed Franco (Roger Howarth)? Stay tuned to General Hospital to see how mean Carly can get.

Did Lindsie Chrisley Just Accuse Julie Of Causing Her Estrangement From Todd?