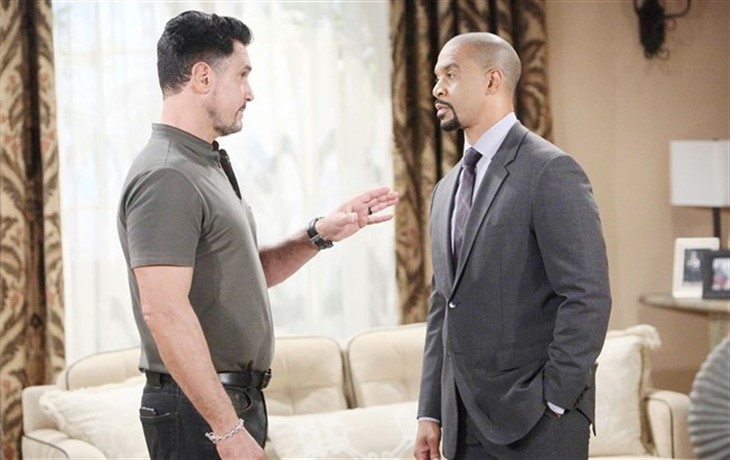 The Bold and the Beautiful (B&B) spoilers for Wednesday, July 14, 2021, reveal in Los Angeles Bill learning everything Justin did and confronting his right-hand man.

It was stunning (and also disturbing) enough when Bill (Don Diamont) watched the video that Vinny (Joe LoCicero) sent Thomas (Matthew Atkinson) of the night Vinny (Joe LoCicero) threw himself in front of Liam’s (Scott Clifton) car and to his death. Now, he gets to learn his best buddy and right-hand man, Justin (Aaron D. Spears), was planning quite the hostile takeover of his company, which led him to lock Thomas in a cage.

The whole story just seems so other-worldly and soap opera-like and Bill is in shock. But that doesn’t mean he doesn’t have a lot to say to Justin. He feels hurt and betrayed and absolutely furious. But doesn’t Justin belong in jail for assaulting a man and locking him in a cage against his will? Is a talk-to from Dollar Bill all he is going to get? Is that punishment enough or will Thomas press charges against the man who kidnapped him? It just looks like people are getting off a little too easy after committing so many crimes.

B&B Spoilers – Liam Spoiers – Has To Swallow His Pride

Now that Liam is out of jail and home with Hope (Annika Noelle), he has to thank the man who made this all happen for him. Liam has never been a fan of Thomas and vice versa (and with good reason) but even he has to admit that Thomas did the right thing. He also has to show his gratitude. So, Liam does the big boy thing and calls Thomas over to thank him at length and in person.

Ridge (Thorsten Kaye) should be thrilled by this turn of events, but he’d be even more thrilled if Brooke (Katherine Kelly Lang) would be like Liam and swallow her own pride. After learning what Thomas did, will she finally soften towards her stepson and understand his friendship with Hope. After all, Hope has Douglas in her life because of Thomas and they are raising the boy as co-parents. Stay tuned to The Bold and the Beautiful weekdays to see how this story plays out.