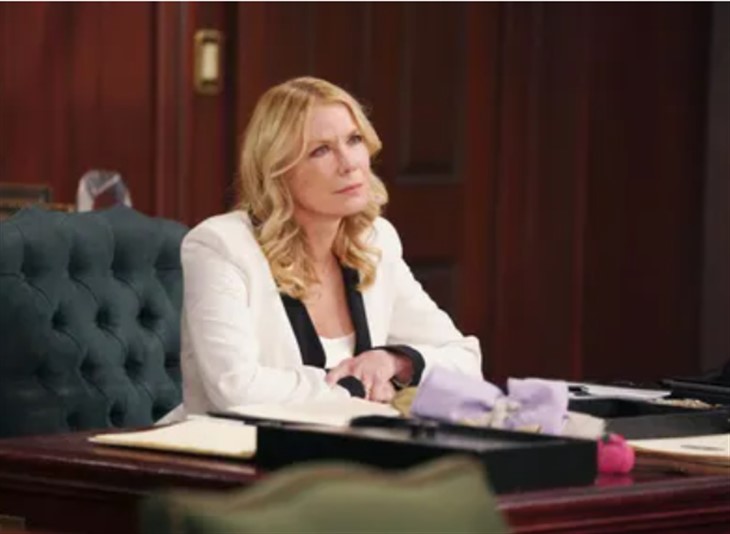 Longtime viewers of The Bold and The Beautiful will recall that Brooke just plain doesn’t like Thomas! She has never liked Thomas, even before his obsession with her daughter Hope Logan Spencer (Annika Noelle)! Even though she allowed Thomas and even invited him to stay in her and Ridge Forrester’s (Thorsten Kaye) home while he recovered from his brain surgery, she apparently just wanted to keep an eye on him! Brooke still thinks Thomas is obsessed with Hope, and that he is going to take advantage of her separation from Liam Spencer (Scott Clifton) to get her back!

By continuing to take this tack, and continuing to castigate and accuse Thomas of something he clearly is not trying to do, Brooke is liable to once again sabotage her own marriage to Ridge! Her refusal to accept her stepson Thomas is what broke her and Ridge up before! What exactly possesses her to trust Waffling Liam and for her to think that he is a better man and husband to Hope than the new improved Thomas would be, is beyond most people’s comprehension! Thomas has worked very hard to improve himself and overcome his tendency towards romantic obsession, and even before his brain aneurysm that caused him to hallucinate about Hope, was able to show enough of an improvement to gain Hope’s trust. Yet, Brooke simply cannot move past her distrust of Thomas!

Brooke’s refusal to believe that Thomas has changed is beginning to anger Ridge. Ridge makes a case to Brooke that if it weren’t for Thomas’ determination to find out the truth about Steffy Forrester’s (Jacqueline Macinnes Wood) baby, Liam would have gone on thinking it was his! How would that have benefitted Hope? Instead, he got the truth out of that scoundrel Vinny Walker (Joe LoCicero) and now Steffy and Dr. John “Finn” Finnegan (Tanner Novlan) are engaged and happy. Otherwise there would have been constant conflict with Liam running over to Steffy on every whim! Thomas told Brooke that he only wants Hope to be happy, and though he admits love for her it is an unselfish love, and not even necessarily a romantic love!

‘The Bold And The Beautiful’ Spoilers: Zoe Won’t Give Up – Carter In Her Crosshairs https://t.co/piEyUuQ37O pic.twitter.com/qJwkltHsLc

Brooke won’t believe him. Thomas pleads his case and his father backs him up, saying even though Hope ultimately asked for a separation, at least she knows that Liam doesn’t have a second child with Steffy, and Steffy isn’t in an awkward position with Finn either! She was ready to take Kelly Spencer (Avalon and Colette Gray) and run to Paris for an indefinite period! Brooke may put up an argument that how does Ridge know that Thomas didn’t set up this whole baby paternity drama to make himself out a hero to Hope? Ridge cannot believe what he is hearing. It’s like Brooke wants to invent scenarios to blame Thomas for!