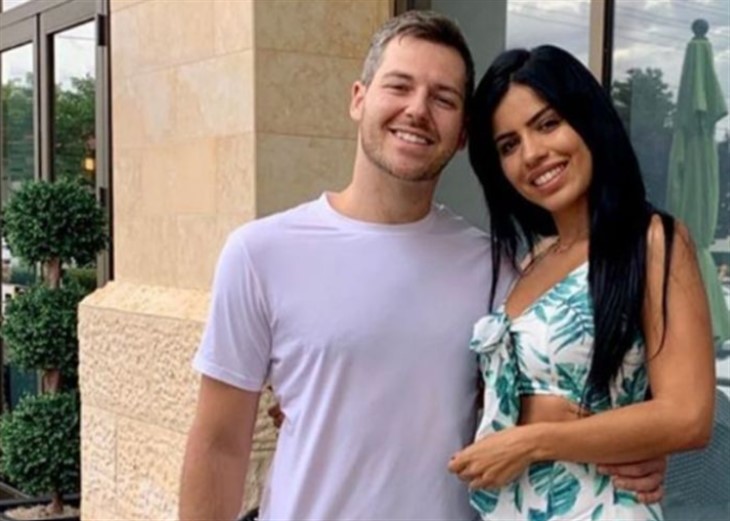 Larissa Lima & Eric Nichols’ relationship seems on-again, off-again, to the point of confusion, and now she hinted they got engaged. Furthermore, she shared a photo of her wedding dress. However, 90 Day Fiance fans doubt that really happens. And that suspicion comes from a tag in Portuguese that she used on one Instagram Story recently

Recently, Colt Johnston’s ex dropped a series of hints that she and her boyfriend might become engaged. Recall, they dated on and off ever since she divorced Colt. However, they often split for varying periods of time. The 90 Day Fiance couple moved to Eric’s hometown, Colorado Springs. Immediately, fans suspected she’d hate it there, especially after enjoying city life. That came when TJC fired her for adult content on a website.

Well, Larissa Lima & Eric looked blissfully happy in Colorado Springs. And while she last in the small town, her relationship with Eric fell through. And, the 90 Day Fiance alum from Brazil dropped some toxic comments about him. Bored with it all, TLC fans lost interest. Is that why she suddenly hinted they became engaged? Actually, it seemed they reconciled in February when Eric shared a smooching photo on their second Anniversary. Now, her hints went beyond reuniting to engagement, and even marriage.

TLC – 90 Day Fiance – Blinging The Ring And A Surprise Announcement

On Friday, March 25, Larissa took to her Instagram Stories. In the post, the 90 Day Fiance alum hinted strongly to fans of Larissa Lima & Eric that they become engaged. She said that in one day, one hour, and 33 minutes, fans could expect “BIGGY NEWSSSSS.” So, fans thought she hinted that Erci was blinding the ring and getting serious. Plus, she previously hinted about that in a Q&A. Well, fans waited a day, and then the next drop came.

Apparently, Larissa Lima & Eric become serious about marrying. Presumably, the “Biggie” surprise involved that as she wore a wedding dress. One fan later mentioned that she talked about shopping for the dress. And, as the picture revealed her in a mall, it’s unlikely they married there. Even with her penchant for attention, that seems a bit extreme. So, it doesn’t look likely that they married yet. But some fans doubt any if it’s real.

Lots of people think Larissa Lima & Eric might actually marry for mutual financial befits if not for love. But many more believe it’s nothing more than a publicity stunt. And that arose when someone translated the hashtag that she posted on her “Biggie” surprise slide. It meant “I teach you how to break the internet” – “Eu te ensino como quebrar a internet.”

Well, that sounds like the Larissa Lima fans know of old. Do you agree? Will she really follow up an engagement with a super-fast wedding? Time will tell.

Remember to check back with us often for more spoilers, news and updates about Larissa Lima & Eric Nichols from TLC’s 90 Day Fiance.