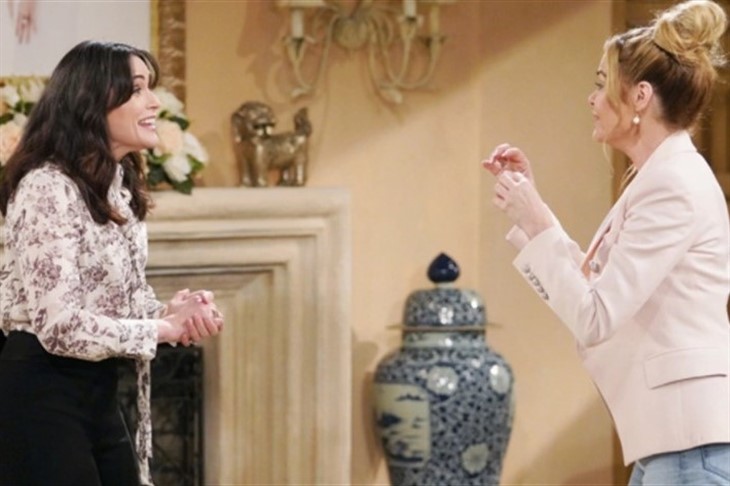 The Bold and the Beautiful (B&B) spoilers document that Quinn Fuller Forrester (Rena Sofer) and Shauna Fulton (Denise Richards) are over the moon. What the reunited friends have long awaited has happened.

Flo Logan (Katrina Bowden) and Wyatt Spencer (Darin Brooks) knew that their mothers deserved to know the good news first. So, they went to the Forrester mansion, played coy for a few minutes, and then dropped the reveal on their parents in the very spot where a grand event could soon happen.

Daytime has always been about drama. So, seasoned fans are naturally wondering how long Flo and Wyatt will be riding the high wave in Los Angeles, California?

The Bold And The Beautiful Spoilers – Past Drama Put Behind Them

Sally Spectra (Courtney Hope) was an obsessive pest. She convinced herself that Wyatt was her true love, when Brooks’ character was actually just a guy she connected with.

Wyatt was never deeply in love with Sally. She was his second choice to Flo, with Bowden’s character being the woman he wanted to marry since the moment he first saw her in high school and thought that she was fly. Yes, that term was used in B&B’s dialogue for old school effect.

So, with Sally having moved to Genoa City, Wisconsin, per Wyatt’s insistence that she leave him and Flo alone, this couple’s romantic destiny was set to unfold and now it has.

It wasn’t easy for Quinn and Shauna to raise their children alone, but they did. This was the choice each woman made and neither person has ever claimed otherwise, or sought pity regarding the responsibility they assumed.

Both great ladies did a strong job in raising two good kids who are now in their thirties. That wasn’t an easy accomplishment, especially considering the high roller environment where Quinn and Shauna once lived. But those Las Vegas, Nevada, days have become distant memories.

The Bold And The Beautiful Comings And Goings: The Return Of A Cute Kid, A Saucy Vixen Is Back And More #BB #boldandbeautifulhttps://t.co/uYryNRsr2h

The Bold And The Beautiful Spoilers – Marriage Location Is Important

It appears as though Wyatt intends to marry Flo in the near future. His fiance is on-board with that plan. Both mothers are as well, with grandiose visions that involve lavish wedding destinations.

Considering existing, real life protocols and limitations it would seem plausible to believe that an LA wedding will happen. An outdoor event, with spring having arrived, would be fitting.

Although, many nuptial ceremonies have happened in the home where Quinn resides. So, Flo and Wyatt could also tie the knot inside the Forrester mansion with their mothers, Bill Spencer (Don Diamont), other family members and friends are present.

Days Of Our Lives (DOOL) Spoilers: Sami And Lucas Fall Into Bed, Will E.J. find out?