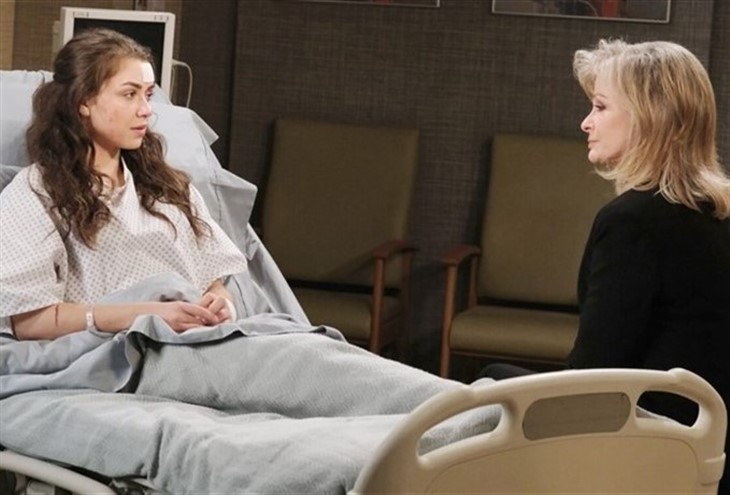 Days of Our Lives (DOOL) spoilers reveal that Ciara Brady (Victoria Konefal) is already dealing with a lot. No memory of the past three years and feeling terrified of her own husband. She also has a hard time believing a lot of updates that she’s learned. Marlena Evans (Deidre Hall) will need to share bad news with Ciara. Could it be about Hope Brady (Kristian Alfonso)?

DOOL spoilers reveal that Ciara and Ben Weston’s (Robert Scott Wilson) new life journey has been filled with obstacles. They couldn’t even make it through their own wedding without a bomb going off. Eventually, Ciara was presumed dead after Vincent Belman’s (Michael Teh) car exploded. Both Ben and Hope had a difficult time with it but dealt with it in different ways.

DOOL Spoilers – Search For The Truth

While Rafe Hernandez (Galen Gering) was still laying low in Mexico, Hope decided she was leaving Salem. She left a letter explaining that she needed to search for the truth. Rafe was heartbroken but tried to be understanding. At one point, he mentioned that Hope never answers the phone but did reply to a few text messages. So, she was either fine at that point, or someone was pretending to be her.

Days of Our Lives spoilers reveal that Marlena will share some bad news with Ciara. It probably has nothing to do with Ciara’s memories, the hypnosis, or not remembering Ben. None of that would be very upsetting to Ciara. She probably wouldn’t feel much of a reaction, actually. However, the one thing that would be devastating to the young woman is if something happened to her mother.

Days of Our Lives (DOOL) Spoilers: Ava Trusts Nicole With A Secret, What Will She Do With It? #Days #DOOL #DaysOfOurLiveshttps://t.co/byH5FtpRWK

Hope left Salem to search for the truth, yet Ciara is alive. So, people must have been calling and texting Hope to let her know. If Hope knew that Ciara was found alive and was in Salem, she would race to see for herself. She hasn’t done that and nobody has heard from her since Ciara’s rescue, either. It’s possible that Hope might be considered a missing person. That would give a reasonable explanation why Hope isn’t involved in Ciara’s new story. Meanwhile, it gives the soap time to find a recast or save the “shocking return” for a future storyline. This is a missing person’s case that won’t be easy to solve. Nobody knew which direction Hope was headed. How will Ciara handle this news?

With the head trauma and amnesia, along with Hope going missing, Ciara will need her family and friends more than ever. What will be the story behind Hope’s disappearance? Was it related to Ciara’s captors or did Hope run into trouble unrelated to Ciara’s abduction?