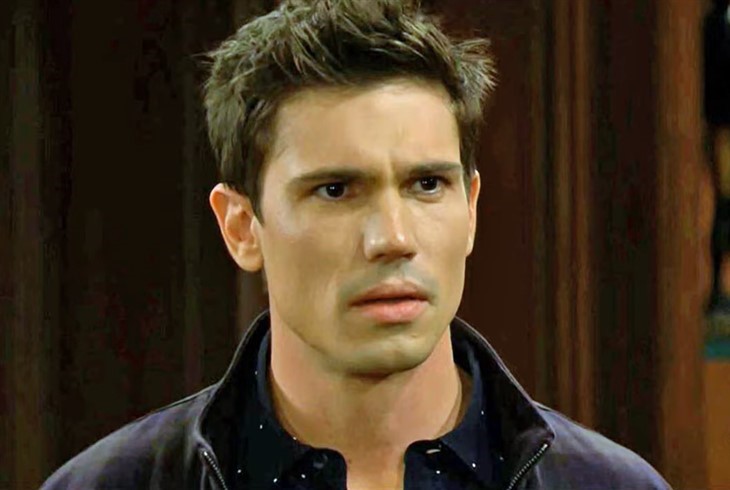 The Bold and the Beautiful (B&B) spoilers and rumors keep circulating about Steffy’s new fiance and baby daddy. Is he really too good to be true and what is this man’s real background?

The Bold And The Beautiful Rumors – Not A Knight In Shining Armor?

Steffy (Jacqueline MacInnes Wood) seemed to find the man of her dreams after taking a ride on her motorcycle and getting hit by Bill (Don Diamont), who seems to have issues with car accidents of late. She became Dr. John Finnegan’s (Tanner Novlan) patient and soon a relationship developed that was more than just doctor/patient. Finn helped Steffy through her addiction to pain pills and a romance began.

Now Steffy is ready to marry this man and give birth to his child. However, we barely know anything about him except that he’s a doctor. Heck, we don’t even know what kind of doctor and have never even seen where he lives.

B&B Rumours – A  John Finnegan Connection On The Canvas?

Is Finn related somehow to someone we know? Perhaps he knew Vinny (Joe LoCicero) before the whole DNA switch fiasco and that is why he was more shocked than we expected when he first saw the man’s body in the morgue.

Other rumors floating around peg him as Sheila’s (Kimberlin Brown) son. Remember, she has a son named Ryder we haven’t heard from in quite a while. In fact, Ryder would be Kevin’s (Gregg Rikaart) brother from The Young and the Restless, as they share the same father. Perhaps John Finnegan is a fake name and he is really Ryder.

That would come as quite a shock to the Forrester clan. As far as we know Sheila is still a waitress at their favorite Italian restaurant. Might Finn be in touch with her if they are still in the same town?

The Bold And The Beautiful Spoilers: Bill Is Itching To Give Thomas A Sucker Punchhttps://t.co/f1LWnmtqhe

The Bold And The Beautiful Rumors – No Connection But Crazy?

Maybe Finn isn’t connected to anyone we know, but he has to have a dramatic past, right? Or he wouldn’t be a real soap character. Perhaps he has some psychological problems we are unaware of or has other crazy members of his family that are not our crazy Sheila. Steffy will need a little drama when she returns and a baby daddy who is unwell certainly fits the bill. Stay tuned to The Bold and the Beautiful weekdays to find out more about Finn.