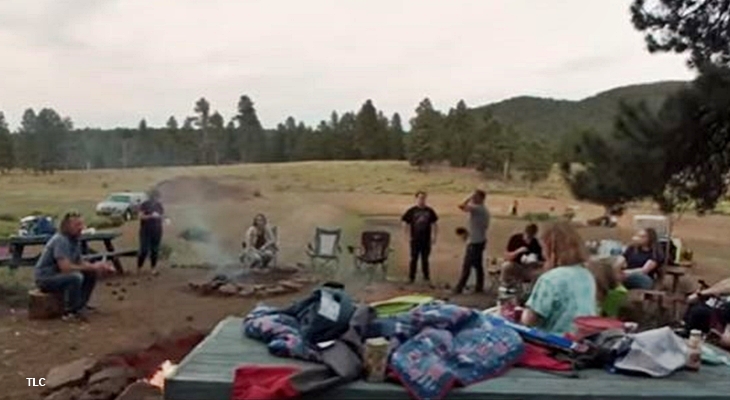 Sister Wives spoilers for Episode 2 of Season 16 revealed the Brown family getting together to farewell Janelle’s son Hunter, who left for school in Baltimore. Of course, Kody is paranoid about COVID, so it becomes a major hassle with obstacles all over the place. Anyway, after much debate and objection from Robyn, they all gathered together, socially distanced like a TV advert for the virus. But, Meri had to find her own fire as she was the odd one out.

Since the show was filmed a while ago, the coronavirus was still very much around. However, Kody was paranoid from the very beginning. So he made up all sorts of rules for the various wives. Janelle, however, didn’t stick to them to the letter. Actually, in Season 15, fans saw that Kody grew upset with her as she allowed her adult children to go in and out of the house. Upset, he couldn’t pop in and see Janelle any old time he felt like it. Of course, since then, in real life, the rules eased a lot. This weekend, Janelle drove down to North Carolina and visited with Madie Brown Brush on Thanksgiving,

Sister Wives star Meri Brown chatted with Kody who seemed to hanker for someone to chat to. In fact, she seemed naively happy that he spent some time with her. Actually, he believed she was the only one who really lived safely and took care during the coronavirus. It was their 30th anniversary, but everyone knows he’s not interested in her as a wife. Anyway, she’s like butter when he crooks a finger. Still, that little bit of attention made her joyful. Then later, at the barbecue for Hunter, Kody made her a sMores. TLC fans wonder what lies behind his sudden friendliness and what he wants from her.

Sister Wives – The Segregated Fires At The Barbecue

Robyn didn’t feel comfortable with the family gathering for Hunter’s farewell. After all, she’s been a good girl about Kody’s coronavirus restrictions, as far as she’s concerned. Well, Christine did confess that she and Janelle have been together. Anyway, Kody made the firepits but the rules were one family per fire pit. Of course, that left Meri high and very and swinging in the wind. Kody suggested she help to look after the kids. However, Robyn felt that might look like they bent the rules for Meri and wanted her to her stay away from her little ones. Happy just to be in Kody’s company, Meri eagerly accepted a sMore that he made her.

Sister Wives fans reacted to the situation on Twitter and they mocked Kody for his regimented social distancing. They also commented about fire-wander, Meri. One wit quipped, “Be careful Meri. That smore is probably poisoned lol .” Meanwhile, others slammed Robyn who seems very otherwise and as objectionable as possible. One fan noted that by saying, “So wait… Meri has been quarantining for weeks and STILL can’t interact with Robyns kids… fully knowing she doesn’t have covid… and their excuse now is “the other wives & kids will be jealous or confused. I call BS! Robyn is the ringleader. She’s calling the shots.”

Your Thoughts On Meri And The Strange Situation

What are your thoughts on the Sister Wives family socially distancing so rigidly? After all, everyone suspects that apart from Meri, Kody probably hopped into bed with the other women. What about Meri being the odd one out? Dud you cringe for her as she tried to fit in? Sound off in the comments below.