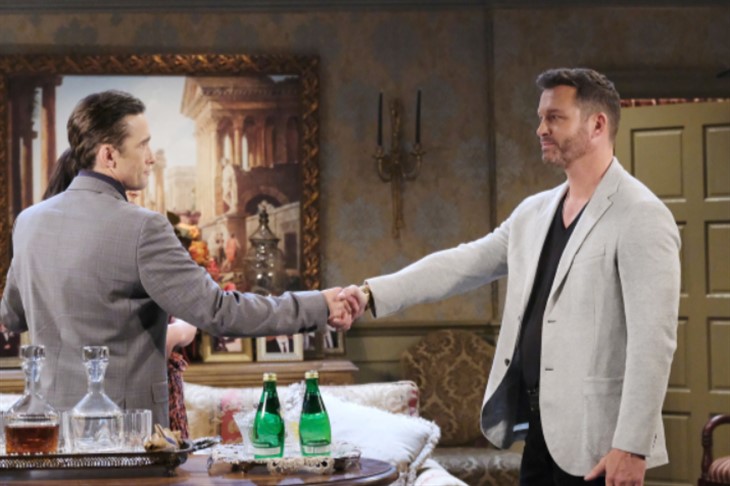 Days of Our Lives viewers will recall that Philip Kiriakis (Jay Kenneth Johnson) has let his jealousy overwhelm him once again! The day that Chloe Lane (Nadia Bjorlin) and Brady were at work at Basic Black and talking about the inappropriate use of the conference table, Brady had fantasized out loud about he and Chloe using it in the same manner! Philip had come looking for Chloe and overheard the conversation, thinking it had actually happened! Philip was so angry he went out in the woods to where he had planted a tree of remembrance with Chloe, and ripped it out of the ground by its roots!

He then proceeds to test Chloe’s loyalty, which is something she doesn’t appreciate. They had been in a fight previously because he didn’t trust her, and that had been over his accusation of having an affair with Brady at the Salem Inn merely because he’d carried her bags in for her. Days of Our Lives viewers will recall that she’d moved out of the Kiriakis mansion because of Philip’s insane jealousy!

Longtime viewers of Days of Our Lives will remember that Philip and Brady were romantic rivals over Chloe way back in high school as teenagers! There was a prom dance and Philip had made a bet over who would take “Ghoul Girl” as the goth-looking teenage Chloe was called. Philip “lost” the bet which was made by Shawn Brady (Brandon Beemer) but Chloe turned from a caterpillar into a beautiful butterfly at the dance, and Philip was smitten! They dated for a while, but when Chloe found out Philip asked her to the dance because he’d lost a bet with Shawn, that was the end of that! Days of Our Lives viewers will also recall that later, when Brady came into the picture, she became acquainted with him and they bonded over their shared love of opera.

Days Of Our Lives Spoilers – Would Philip Kiriakis Really Go This Far?

Days of Our Lives viewers may wonder how far Philip would go to hang onto Chloe, because all his constant jealousy, control tactics and distrust of her is only driving her further away! No one wants to stay with a lover who doesn’t trust him or her, let alone one that tries to control his or her every move!

The Days of Our Lives weekly preview shows a man with a crowbar coming up behind another man and knocking them out and dragging him away, and that certainly can be described as a vicious attack! But would Philip really go this far? Brady’s being injured would only draw Chloe closer – as evidenced when he was recovering from a gunshot a few months ago. But Philip’s intent may not be to injure Brady, but to kill him! After all those years of competition over Chloe, Philip may indeed have gone off the deep end, but viewers can be sure that Brady will survive!