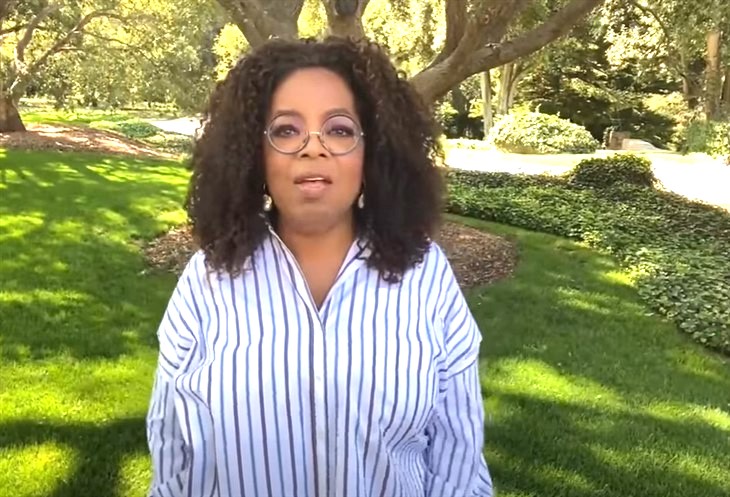 British royal family news reveals that Prince Harry and Meghan Markle’s special friend Oprah Winfrey has now lost twice in regard to her association with them. The first time was when she aired an ugly, accusatory interview in which the pair made fools of themselves by making bizarre claims that have since been disproven.

The award went to Stanley Tucci for his CNN series Stanley Tucci: Searching for Italy. What in the world would Oprah have said in her acceptance speech? That she thanks Meghan and Harry for trashing his family so that she can scratch another notch in her talkmeister belt?

Harry and Meghan’s much criticized interview aired in March while his grandfather 99-year old Prince Philip was on his deathbed. The arrogant pair made a plethora of bizarre claims, many of which were shown to be fibs.

During the interview a heavily made up Meghan wore a black dress as if in mourning for the bridges she was about to burn. Harry was allowed to come sit on the couch after Meghan had her say for an hour. He told Oprah of Meghan’s baby bump, “It’s a girl. Just to have a boy and a girl, what more can we ask for? We’ve got our family. We’ve got, you know, the four of us and our two dogs, and it’s great.”

The two of them proceeded to throw his family under the bus, which we’re pretty sure was not great for the royals.

Royal Family News -The Markle’s Are Large And In Charge

The former Deal or No Deal suitcase girl called out her sister-in-law Kate Middleton not once but twice, and bullied her by using the rude nickname “Waity Katey.”

In June Harry said of his new daughter, “She’s very chilled and seems happy to just sit there while Archie is running around like crazy. We have been very lucky so far.”

Also that month an insider told Us Weekly that Archie “adores” his sister and gives, “her lots of kisses. He’s held her with the help of his parents. He is such a kind, loving child and there aren’t any jealousy issues.”

Will Harry still think Archie is a loving child if in 20 years he gives his own ugly nationally televised interview about how awful his family is?