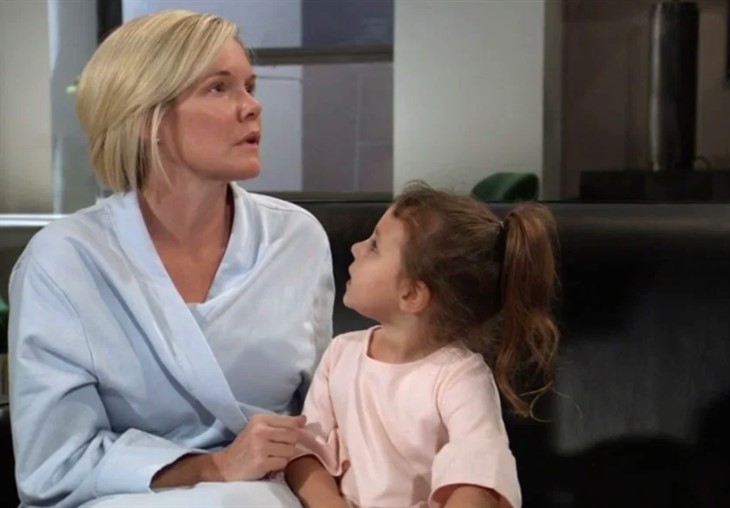 General Hospital (GH) spoilers show Avery Jerome-Corinthos (Ava and Grace Scarola) has an unconventional family. Avery is the daughter of Sonny Corinthos (Maurica Benard) and Ava Jerome Cassadine (Maura West). Sonny and Ava have not agreed on who should have custody of Avery in the past.

After a time they came to an agreement on General Hospital that had started to work for Avery. However Sonny has been declared dead after he fell from a bridge in New Jersey. Sonny had been trying to find Julian Jerome (William deVry) because he had been working with Cyrus Renault (Jeff Kober).

GH spoilers and recaps show Sonny had been trying to keep Cyrus from taking over his mafia organization. Now Ava has taken full custody of Avery who had been living with Sonny and his wife Carly Corinthos (Laura Wright). Carly has not been happy that Avery is living with Ava and her husband Nikolas Cassadine (Marcus Coloma). She wanted Avery to stay with her and with her other family members. General Hospital spoilers show Ava has been letting Avery spend time with Carly and her other family.

General Hospital (GH) Spoilers: Brook Lynn Uses Her Baby To Get ELQ Back

Carly has been getting more involved in Sonny’s organization. She kidnapped Cyrus’ mother Florence Grey (Annie Abbott) to keep Cyrus from taking over Sonny’s territory. Cyrus is not happy that his mother has been taken by Carly even though he believes that Jason Morgan (Steve Burton) arranged the kidnapping.

Cyrus wants his mother back. Jason had been able to keep Cyrus from trying to take over Sonny’s organization but he has been framed for the death of Franco Baldwin (Roger Howarth). Now Carly is going to have to deal with Cyrus directly. Will Cyrus want to go after one of Sonny’s family members in order to get his mother back? Could he go after Avery on General Hospital?

Ava and Nikolas have a complex relationship. They did not start out in a loving relationship but have found happiness with each other. They are planning to have a second wedding. Recently Ava received a very disturbing gift from an unknown individual. She also received a cryptic message. Ava believes that Ryan Chamberlain (Jon Lindstrom) was behind it.

GH spoilers and recaps reveal Ryan had been obsessed with Ava. He had even killed her daughter Kiki Jerome (Hayley Erin) because he had thought it would make Ava happy. Ava and Kiki were having problems with their relationship at the time. However Ryan has a condition that has left him catatonic. Ava and Nikolas may not be in danger from Ryan but they are facing a potential threat. Could the person who is going after Ava and Nikolas try to do something to Avery?

General Hospital Avery is safe at the moment. Ava and Nikolas live at Wyndemere Castle which is an estate on an island. It would be difficult but not impossible for someone to try to take Avery. Can Ava and Nikolas keep Avery safe? Carly and Sonny’s home is well guarded. However Cyrus likes to go after family members of his enemies. Could Cyrus try to take Avery when she is visiting Carly?

Can Carly protect Avery without the help of Jason? Tune into General Hospital to find out if Avery will be safe or be put into some kind of danger.  Check Soap Opera Spy daily for more General Hospital spoilers and GH recaps.