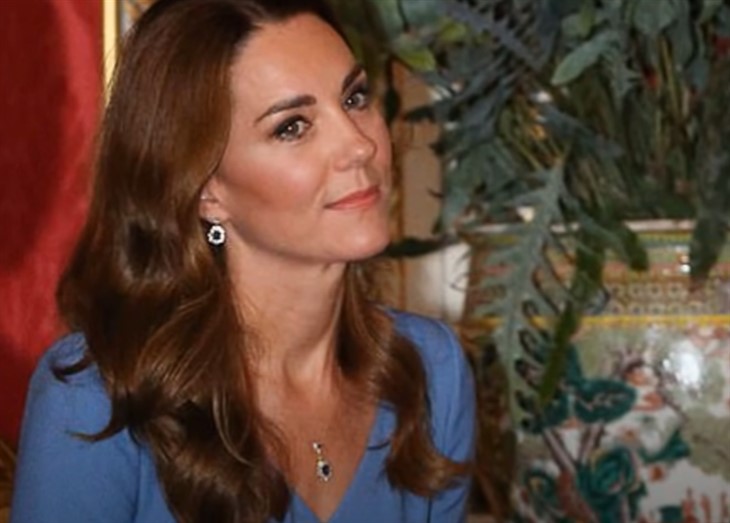 The Duchess of Cambridge did not hold back when it came to hosting a drive-in movie night with Prince William, after all, it’s not every day that the royals get to spend time away from their kids, without being on official business.

Kate stepped up her jewelry game, even borrowing Queen Elizabeth’s stunning sapphire and diamond earrings, which the Queen is said to have exclaimed in amazement when she first laid eyes on the set in 1979, for the event.

While the movie night is sort of tied in with their work as royals, it was a fun night for everyone involved.

The Duchess, who I am beginning to suspect is a lover of clothes with checks, stepped out wearing a full-length blue, green, purple, and black checked tartan trench coat from Holland Cooper. She accessorized with a beautiful and glittering pair of sapphire and diamond earrings loaned to her from the Queen for the Thursday event.

The earrings are teardrop-shaped with the appearance of being tied like a bow at the ends and are surrounded by diamonds. The earrings reportedly originated from a sapphire suite that the Queen received as a gift from Sheikh Rashid of Dubai during her visit to the Middle East in 1979.

Made by Asprey, the earrings, ring, and necklace is a definite statement piece with its intricate and unique loop design. According to Leslie Fields in her book “The Queen’s Jewels”, the Queen was so intrigued by the jewelries that she exclaimed in amazement.

The earrings are worn by Kate, however, are not part of the original set. The Queen actually had the earrings made from the excess jewels after she had the necklace shortened.

This is Kate’s first time appearing in public with the earrings, but the Queen has been seen with them for several occasions — she wore them on tour in Canada in 2005.

The loan was particularly fitting as the event took place at the Queen’s official Scottish residence, the Palace of Holyroodhouse, where the couple welcomed the National Health Service staff and recognized their impressive work throughout the COVID pandemic.

Kate also has several pieces of sapphire jewelry in her personal collection.

Royal Family News: Kim Kardashian Wants Nothing To Do With Meghan Markle And Prince Harryhttps://t.co/cGVvew8GAh

William And Kate Pays Tribute To The Late Prince Philip

The Duke and Duchess of Cambridge also paid tribute to the late Duke of Edinburgh, who passed away on April 9, by arriving for the screening of Disney’s Cruella is one of his favorite cars, the 2A Land Rover from 1966.

Prince Philip was a big fan of the car brand that he customized one to carry his coffin at his funeral which took place last month.

Before the movie began, Kate delivered a short speech thanking NHS staff across Scotland for their “extraordinary dedication, commitment and personal sacrifice.”