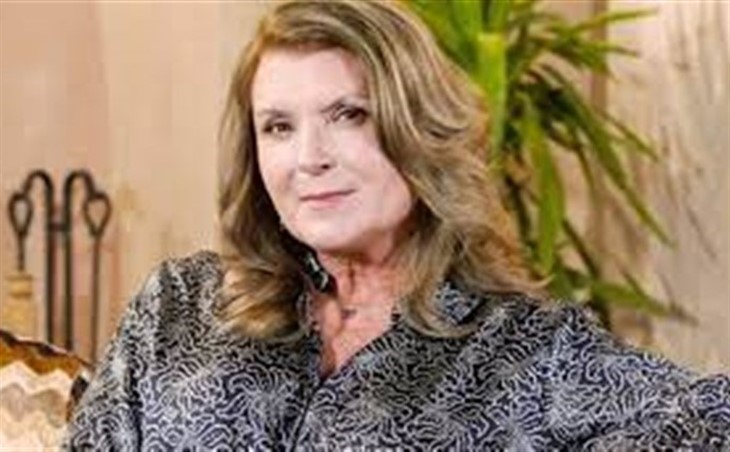 The Bold and the Beautiful spoilers document that Kimberlin Brown’s (Sheila Carter) status on this iconic soap as its all-time leading villain is not in doubt. What was in question was how long Sheila would be staying in Los Angeles, California?

A look at the show’s online cast page now shows Brown’s headshot included in alphabetical order with the other regular and recurring members of the ensemble. That likely means that Sheila will be on B&B indefinitely.

To have John Finn Finnegan (Tanner Novlan) learn that Sheila was his biological mother was brilliant. Finn was presented as sweetness and light until that point.

Other than some sharp verbal jabs at Liam Spencer (Scott Clifton), Finn was Mr. Nice Guy. And, as viewers know, Novlan’s character was defending the love of his life from Liam, rather than being unnecessarily harsh.

So, to write Sheila into the Sinn wedding reception, with ensuing chaos, was a shrewd move. Continued kudos to TPTB for that wise choice.

B&B Spoilers – What About Deacon Sharpe?

Sean Kanan (Deacon Sharpe) rejoined the cast in recent months as well. His photo was not added to the cast list.

The above does not necessarily imply that Deacon will soon be written back out. However, unless Kanan’s headshot soon appears, Deacon will probably be slated as a side character with no more than recurring scenes ahead. That would be a shame if pure speculation proves out.

Deacon’s split from Sheila set him on an individual course. He is making progress with Hope Spencer (Annika Noelle) but could always regress at any point, as has been Deacon’s life pattern.

Claiming that Sheila’s future is bright would be overly optimistic or even unrealistic. Sheila would disagree, as she sees herself bonding with Finn and her grandson, Hayes Forrester Finnegan (Samantha Worden and Piper Harriet).

Sheila also sees her plans to dethrone Steffy Forrester Finnegan (Jacqueline MacInnes Wood) as attainable. Devoted fans know that Wood has revealed she and her husband are expecting their third child in the spring. So, possibly Sheila manages to split Sinn or create some form of strife in the weeks leading up to Wood’s anticipated maternity leave.

With whatever is ahead, it is right to be happy that Brown’s great face appears with the other cast shots. Sheila then, now, and forever because she is great soap.