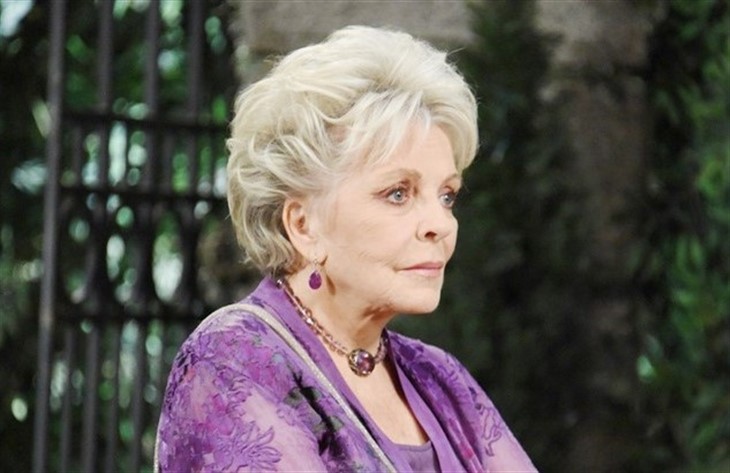 DOOL spoilers reveal that on Wednesday’s episode, Julie won her power of attorney case. It allowed her to not only bring Doug Williams (Bill Hayes) home for Thanksgiving, but to completely check him out of Bayview. Even though everyone was concerned about Julie’s rash decision, they will soon realize that she did the right thing.

On Friday, Marlena will insist on taking Doug back to Bayview. However, Doug manages to stand up and say something despite all the powerful drugs in his system. Doug points his finger at Marlena and calls her the devil. As “MarDevil” tries to drag Doug away from his family, Julie will fight back. It is teased that there will be a huge showdown between Julie and “MarDevil.”

After speaking with Johnny DiMera (Carson Boatman), Steve realizes he needs to check out the DiMera crypt. Steve doesn’t want to alarm Johnny, so he claims that John Black (Drake Hogestyn) isn’t missing and that he’s just trying to connect the dots on his undercover operation. When Steve gets to the DiMera crypt on Friday, he finds it locked. That doesn’t stop Steve, though. Taking a shovel, Steve breaks into the crypt.

Days of Our Lives spoilers for Friday reveal that EJ, Tony DiMera (Thaao Penghlis) and Anna DiMera (Leann Hunley) will be celebrating a quiet holiday together. Out of nowhere, chaos erupts, which must be connected to Steve finding Susan and John. As fans recall, Susan stabbed herself in order to save John and EJ, as well as the entire town of Salem.

On Friday’s episode, Susan will be hospitalized for her injuries. Susan will get a visit from her son. EJ will probably want to know exactly what happened. However, will he do anything about “MarDevil” or could he not believe his mother?

Even if EJ doesn’t believe Susan’s story, she has a credible witness, which is John. Plus, Doug will be believed when “MarDevil” exposes herself to Julie, Belle Brady (Martha Madison), Shawn Brady (Brandon Beemer) and Kayla Johnson (Mary Beth Evans).

Which storyline are you looking forward to seeing on Friday, November 26? What are your predictions for the characters? Keep watching the NBC soap to find out what happens next.