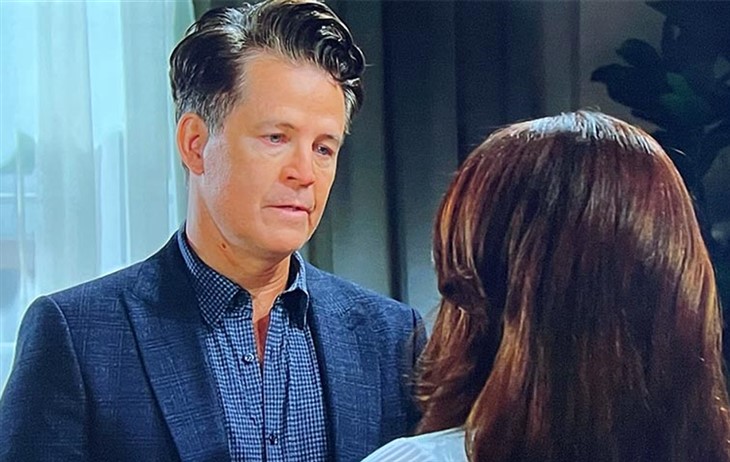 The Bold and the Beautiful spoilers document that Jack Finnegan (Ted King) took Sheila Carter’s (Kimberlin Brown) advice to heart. He appreciated her covering for him across three decades. But the suggestion about confronting a coming reality forced a bet to be made.

Jack is hoping that telling Li Finnegan (Naomi Matsuda) about their adopted son’s paternity before John Finn Finnegan (Tanner Novlan) confirms reality will preserve their marriage and family. But Jack knows that catastrophic damage could mean Li leaves, and Finn distrusts him forever.

The Bold And The Beautiful Spoilers – Deacon Sharpe Serves As Example

Deacon Sharpe (Sean Kanan) told Sheila that he was not going along with her plan to fool their loved ones into thinking Shecon was real. He was taken aback when she invented that ruse at Il Giordino, while Finn and Hope Spencer (Annika Noelle) served as the audience.

Sheila pulled from her old bag of tricks. Deacon opted to return to his initial plan, which was to be direct with Hope and Brooke Logan Forrester (Katherine Kelly Lang).

Brown’s character was influenced by the early progress Deacon is enjoying. Hope welcomed his return to the family. Plus, Brooke is not opposing him as Sheila thought she would.

If Jack was with Sheila before he and Li were married, then he could at least say that no vows were broken. But, as viewers know, Jack and Sheila were together during the early years of his marriage to Li.

The resulting so-called adoption was not the compassionate effort Jack claimed it to be. Instead, it was a cover for the illicit connection he and Sheila shared.

Jack convinced Sheila to give him their child and not to be involved in Finn’s life. King’s character withheld what took place more than thirty years ago when he had a chance to tell the truth during the Sinn wedding reception. That furthered his lie, which will add to Li’s plight.

The Bold And The Beautiful Spoilers – Everyone Needs Someone, Even Sheila Carter

If Li splits from Jack, it will be fair to think that he could take comfort in Sheila’s arms. That would come after he blamed Sheila for encouraging him to tell the truth.

Sheila wanted to couple with Deacon. But he rejected that offer. So, who could B&B’s most villainous character form a connection with going forward, if anyone?

Sheila would not be pairing with Jack. She would be reconnecting with the father of their son. That would make soapy sense, as both characters sparked in the past.